Theatre: Everything That Rises Must Converge review 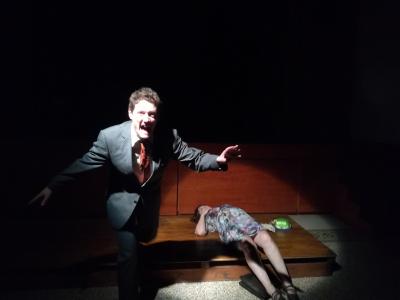 ROME - Gaby Ford has opened The English Theatre of Rome’s Winter Season with a triumph. Stripped to its bare bones, her staging of Flannery O’Connor’s masterpiece ‘Everything That Rises Must Converge’, is brilliant in its simplicity. The choral reading conveys with transfixing clarity the work’s exploration of racial tensions and generational conflicts, themes just as relevant today as they were in 1965.

The reading opens with five uninterrupted minutes of archival images and videos showing black people’s plight over the past 60 years for equality. This artfully conceived opening sequence, produced by rising newcomer Ella McGlynn, immediately sets off a tone of melancholy which, although perceptible throughout the production, is occasionally lightened by moments of comic wit.

Set in the recently integrated, uneasy south of 1960s America, the story focuses upon the troubled relationship between Julian, a recent college graduate, and his widowed mother. Events unfurl during a ride on an integrated bus, as the protagonists’ personalities begin to clash. Julian rejects the traditional social order and seemingly embraces the younger generation’s liberal ideas, while his mother still adheres to old customs and treats black people as fundamentally inferior.

Though the reading is tightly choreographed and finely calibrated, Ford’s presence is not overshadowing. She condenses O’Connor’s setting to three rostra, two flights of stairs and a raised wooden platform on the audience floor. What is perhaps most striking about this practically bare setting is the symmetrical effect it produces. Painstakingly simple and aesthetically pleasing, it makes the story easier to follow, while the limited and selective use of lighting engages the audience all the more.

The culture of the Southern town of the 1960s is embodied rather than simply illustrated: in Jonathan Hedley’s hopeful yet conflicted Julian, in Leon Lewis’ naïve and loveable Carver and in Lee Archer’s tired and frustrated depiction of Carver’s mother. The cast is strong, with some actors playing multiple roles and others the opposite sex. Rather than detracting from the story’s credibility, this underlines the script’s versatility and makes the reading all the more powerful.

Yet the most convincing performance is that of Rosie Hillesley as the vindictive mother of Julian, a middle-aged woman who dotes on her son and is irrepressibly tied to the social conventions in which she was raised. Her evocative facial expressions brilliantly highlight the innate human tendency to draw superficial judgments.

The reading is compelling throughout. The actors frequently lock eyes with certain audience members, retaining their attention. Yet they also often speak over one another, as people do in everyday conversations. Though this maintains the story’s credibility, it occasionally hinders the audience from getting to grips with O’Connor’s layered and somewhat dense prose.

Use of costume is effective. Some characters wear a particular item of clothing which, by distinguishing them from the others, determines their identity. In the case of Julian, this is a tie, while in that of his mother, it is a colourful hat. Ford’s stark stage setting and limited use of props draws attention to characters’ clothing, prompting the audience to recognise the importance we attribute to appearance in everyday life.

This choral reading of Flannery O’Connor’s ‘Everything That Rises Must Converge’ was presented by The English Theatre of Rome, in collaboration with John Cabot University’s Italy Reads Pogram.

Coming soon at The English Theatre of Rome, fresh from an Alaskan and Greek tour: 'Don Quixotes', Dec. 1-9 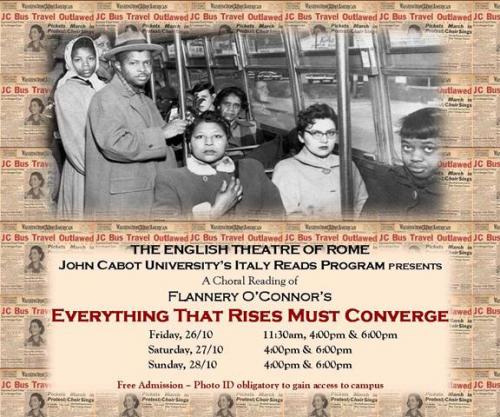