Vatican embassy bones may be of adult woman 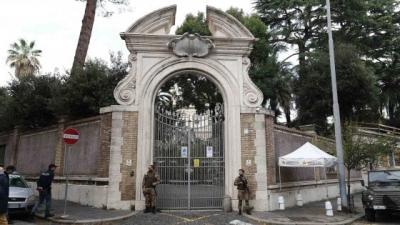 ROME – Investigations into the human remains found at the Vatican's embassy to Italy have suggested that at least some of the fragments belong to an adult woman, rather than a teenager, sources say.

Questions had been raised as to whether the bones found have any connection to the disappearance of either Emanuela Orlandi, a daughter of a Vatican employee, or Mirella Gregori, who went missing in Rome in 1983. The disappearances happened just a month apart, in May and June of 1983, when both girls were just 15 years old.

However, an initial examination of the teeth found seems to point to a non-adolescent woman, as do tests on the bone structure of some of the remains found. "At this moment I cannot confirm the age or the sex before the laboratory results come in, but the first impression, based on the examination of some bone structures, is that they belong to a woman around the age of thirty, not a teenager," Vatican consultant Giovanni Arcudi said on Tuesday. Investigations have also suggested that more than one person's remains were found, given the disparity in age of the fragments discovered in the embassy basement.

Emanuela's brother Pietro Orlandi said, "We are still awaiting the outcome of the first analysis, which will tell us the sex, which as of yet is still uncertain," remaining cautious in his statements to the media. The family's lawyer Laura Sgró maintained that the recent developments "change nothing for the family." "We do not know if Emanuela died and if she did, we do not know when...We'll wait for the outcome of the DNA tests," she added.

During “renovations of a room annexed to the Apostolic Nunciature in Italy, Via Po 27 in Rome, some human bone fragments were found in a basement,” a release from the Holy See last week read. Judicial sources said that workers renovating the site found said bone fragments in one area, but almost a whole skeleton in another. "We were digging...then we saw the bones and we immediately raised the alarm," the workers reportedly commented.

Responding to the initial discovery, Pietro said, "the news should fill us with joy, but if the bones turn out to be Emanuela's, it will be as if she died today." "If this is the truth," he continued, "it's importnat for it to come out. I want to know why Emanuela was in that place and who brought her there."

In the initial investigation of the girls' disappearances, six people, including a priest, were questioned on suspicion of abduction and murder, but no clear evidence of their involvement was found. All but one of the six had links with the 'Banda della Magliana', a Rome-based crime gang that no longer operates.