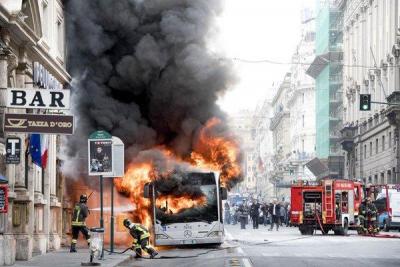 ROME - Unable to stand the city’s overflowing bins, perilous potholes and rampant rodents any longer, Romans are to hold a mass sit-in on Oct. 27 in Piazza del Campidoglio. Under the hashtag #romadicebasta (“Rome says enough”), residents’ associations, civil society groups and ordinary Roman citizens will gather together in protest against the sorry state of the capital.

Public complaints about the squalid state of the city's streets began to surface in May when six female professionals, including a journalist, an architect, an editor, an art historian, an engineer and a political activist, launched a Facebook group entitled “Roma per tutti Tutti per Roma” (“Rome for all, all for Rome”). They defined the group as “informal, progressive, democratic and anti-Fascist”, and used the social media platform to express their disappointment with Virginia Raggi’s administration. Ms Raggi was elected mayor in 2016 promising a fresh start to the capital and an end to corruption.

Many citizens believe the state of the city has only worsened under Raggi, a leading member of the Five Star Movement. Emma Amiconi, one of the organisers of the protest, told reporters just last week, “Rome has abandoned itself. Many people who voted for Five Star are disappointed. It is true that the administration inherited a difficult situation but 28 months after what was hailed as ‘the victory of the citizens’, the city is worse than ever.”

Many group members have expressed their disdain on Facebook. Marco F. posted just last week, “is it really possible for this city to be reborn again... for it to be clean, decent and efficient once more?”, while Martina F. wrote, “I no longer want to live here, not like this.”

The sorry state of the city was illustrated by a video that went viral online, in which wild boar were shown rummaging through overflowing rubbish bins and a large skip gently floating down floodwaters caused by torrential rain. It also projects the image of a bus engulfed in flames, just yards from the Trevi Fountain. This was one of 21 buses that caught fire this year due to poor maintenance.

The group now has over 19 million members, and is set to grow even larger, especially in light of the collapse of an escalator at Rome's Repubblica metro station on Tuesday evening, injuring 24. It was also revealed earlier this week that many gardeners in the city haven't been showing up to work, perhaps explaining the unkempt appearance of Rome's parks.

Yet not only has the city been deemed “unliveable” by locals, but tourists too have been increasingly put off by the streets' squalid conditions. According to Giuseppe Roscioli, the president of the association, “Fifty per cent of tourists who choose to come to Rome do it just one time while studies have shown tourists go back to cities like London and Paris three or four times".