Barca too much for Inter, as Napoli win stolen at the death 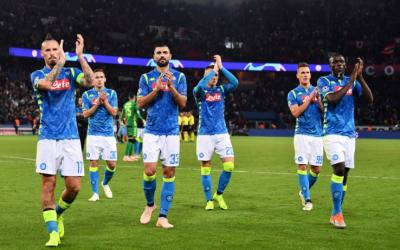 ROME – A weakened Barcelona team still had too much quality for Inter Milan in their Champions League clash on Wednesday, coming away with a 2-0 victory at the Nou Camp.

The Spanish giants, though they sit top of La Liga, have had a below-par start to their domestic campaign, winning just five out of their first nine matches. Yet they maintained their 100 percent record in Europe on Wednesday night, cruising past an Inter Milan side that never really got a foothold in the game.

Despite being without talisman Lionel Messi, who watched from the stands with a fractured arm, Barca produced some stylish football and deserved more than the two goals they scored. Ex-Inter loanee Rafinha opened proceedings on 34 minutes, putting away Luis Suarez’s delightful cross, before left-back Jordi Alba doubled Barca’s lead with seven minutes to go. Goalkeeper Samir Handanovic was Inter’s best player on the pitch by far, making nine saves to keep the score-line respectable.

In Paris, Napoli were denied a deserved win by a stoppage-time equaliser from PSG’s Angel di Maria in an enthralling contest. Continuing his superb Serie A form for Napoli, Lorenzo Insigne got the Italian side off to a perfect start as he gave them the lead in just under half an hour. The winger’s strike was cancelled out by a Mario Rui own goal in the second half, but Dries Mertens re-established Napoli’s lead, and looked to have fired them to a huge victory. Up stepped Di Maria, however, with a stunning curler from outside the box in the last minute of added time to salvage a point for the French league leaders.

The draw leaves Group C tantalisingly poised going into the second round of fixtures. Liverpool, Napoli and PSG separated by just two points, with only two of the three able to progress into the last 16.