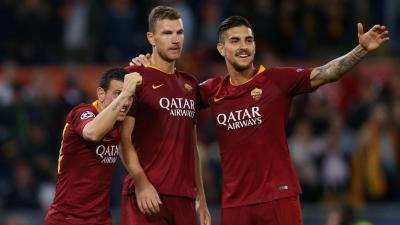 ROME – AS Roma produced a brilliant performance to take a comfortable win against CSKA Moscow in their Champions League fixture at the Stadio Olimpico this week.

Two first-half goals from Edin Dzeko set the tone for the evening, while Cenzig Ünder added a third just after the break to shore up the three points.

The Boznian striker joined Lionel Messi as joint top scorer in this year’s Champions League as he struck twice in 13 minutes before half-time. Both goals came from lovely build-up play from the Roma midfield, leaving Dzeko with simple finishes from close range. After the break, it was a long ball that provided Roma with their third, as the ball fell to Ünder on the edge of the box. The Turkish midfielder rifled it into the top corner, making the score 3-0 and closing out the game. Roma’s victory ensured they kept pace with Real Madrid at the top of Group G, as both teams have recorded a loss and two wins in the first three fixtures.

In Manchester, on Cristiano Ronaldo’s return to his former club, Juventus put in a dominant display against United that demonstrated their Champions League-winning potential. The 1-0 scoreline did not truly reflect the gulf in class that was on show at Old Trafford, as Juventus looked unshakeable in defence and unstoppable going forward.

Ronaldo received a warm welcome as he returned to a club with whom he has tasted Champions League success, but once the game got underway, United fans were all wishing the Portuguese striker had walked out in their team’s red strip. With United’s defence so preoccupied with extinguishing any threat Juventus’ record signing posed, Paolo Dybala was so often left free to roam and cause problems.

Such was the case for the only goal of the game. Juventus stole the ball in midfield and broke quickly with Ronaldo on the right wing. He played a cross towards Cuadrado at the near post, but the ball then fell to an unmarked Dybala, who coolly finished from seven yards out. It was a dominant first half for the visitors, who enjoyed 70 percent possession and recorded ten shots on goal, Dybala’s strike a reward for their continual pressure. United improved after the break, but still didn’t pose much of a threat to the Juventus defence, who dealt with the home side’s sporadic attacks with ease.

Juventus recorded their third straight win in the group stages and can guarantee qualification for the last 16 with a victory in the return leg against United in Turin. However, this display did more than edge them closer to qualification, it showed that Massimiliano Allegri’s side are a force to be reckoned with in this year’s competition.