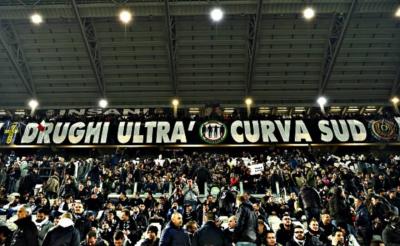 ROME – A report aired on Italian television on Monday has revealed that, in spite of multiple arrests and convictions, tickets for Juventus games have still been sold by touts in large numbers in 2018.

Journalists interviewed a former Juve ultra Bryan Herdocia, who admitted that one faction of ultras, known as the ‘Drughi’, continued to use ticket touts to offload tickets at extortionate prices up until the end of last season.

The Turin side’s Champions League fixture against Tottenham on March 3, 2018 was highlighted in the documentary-style report. Tickets were originally priced at 35 pounds, yet people buying from Juventus ticket touts were charged up to 250 pounds to attend the game at Wembley. Similar price differentials have also been recorded this season, in a home fixture against Lazio on Aug. 28, and away at Valencia in their opening Champions League game on Sept. 18.

The dark side of the tout operation was also revealed, as questions over the apparent suicide of an ultra were raised. Raffaello Bucci died on July 7, 2016 after falling from a viaduct in Turin. According to the report, Bucci was interrogated and beaten up in a search for information about money that was linked to ticket touting, which could have led to him killing himself. The report also revealed that Bucci’s interrogators may have threatened his son.

Imprisoned boss of the Turin faction of the Calabrian mafia ‘’ndrangheta’ Placido Barresi told journalists that “with regards to ticket touting, the whole of Calabria gets involved, not just the Dominello family [who have mafia connections]” He then speculates on Bucci’s death that “they wanted money back” from him, which perhaps lead to them threatening him and his son. PM