Landmark for Ronaldo in Juve draw, while Roma lose again 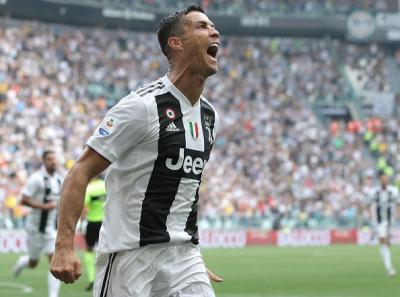 ROME – AS Roma fell to a third defeat in just nine games at the Stadio Olimpico last weekend, while Juventus’ perfect start to the season came to an end in Turin.

A 2-0 home loss to SPAL ensured that Roma equalled their worst start to a Serie A season since 2012. Despite having the lion’s share of possession in the game, Eusebio di Francesco’s side could not find a way through SPAL’s resolute defence. Instead, it was the Ferrara-based team that broke the deadlock courtesy of an Andrea Petagna penalty, after winger Manuel Lazzari had been brought down in the box. Kevin Bonifazi doubled the lead shortly after half-time and, despite losing their goalkeeper to a second yellow-card with 25 minutes to play, SPAL held on for a 2-0 victory.

Cristiano Ronaldo became the first player to score 400 goals in Europe’s top five leagues with his opener against Genoa, but he wasn’t able to inspire Juventus to a ninth straight win. As expected, the Old Lady dominated for 90 minutes, but only managed three shots on target, showing an uncharacteristic inaptitude in front of goal. Ronaldo’s strike was the only time they found the back of the net and Genoa capitalised on their opponents’ lack of clinical finishing with an equaliser on 67 minutes.

Napoli seized the opportunity to gain ground on their title rivals following Juve’s draw and duly did so with a 3-0 away win at Udinese. Early substitute Fabian Ruiz Pena got Napoli off to flyer after just 14 minutes, but progress soon slowed as they struggled to add to their lead. Eventually Dries Mertens converted a penalty, a few minutes before Marko Rog sealed the three points. The gap at the top of the table has been closed to just four points and Napoli will take a great deal of confidence from Juventus’ result.

A fiery Milan derby seemed destined to end in a goalless draw, as chance after chance went begging for both sides, until Mauro Icardi found a dramatic winner in added time. Earlier in the contest, both AC and Inter had struck the woodwork in an evenly poised game. As Inter pushed one last time for a winner, Matias Vecino swung a delightful cross onto the head of Icardi, who converted calmly, sending the ball past the seemingly impenetrable Donnarumma in the AC Milan net. Inter’s win consolidates their resurgence in form over the last few weeks, as they kept pace with Napoli to sit just two points behind in third.

Elsewhere, Lazio remained in the Champions League places by winning 2-0 at Parma, while at the other end of the table, Frosinone and Empoli played out an exhilarating 3-3 draw that kept both sides in the relegation zone. Rooted to the bottom are Chievo, who were thrashed 5-1 at home by Atalanta. There were draws for Bologna and Fiorentina against Torino and Cagliari, respectively, while Sampdoria face Sassuolo on Monday night, as both teams try and keep in touch with the top four.