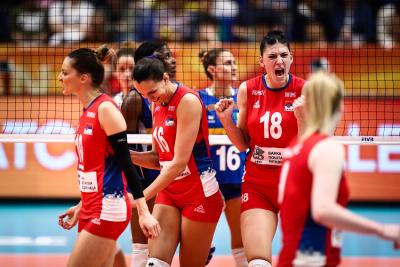 ROME – The Italian women’s Volleyball team suffered a narrow defeat to Serbia in the Final of the World Championships on Saturday in Yokohoma, Japan.

The Azzurri twice led the contest, taking the first and third sets, but the Serbs ultimately prevailed in a nervy final set tie-breaker. The win grants them their first ever World Championships gold, following on from a silver at the 2016 Rio Olympic Games.

As has been the case throughout the tournament, Italy’s challenge was spearheaded by the dominant Paola Egonu, who followed up her record-breaking points total in the semi-final win over China with another sterling performance. She outperformed every Serbian player and converted 33 points for Italy, bringing her tally for the tournament to 324, making her its all-time top scorer.

Egonu’s heroics were ultimately not enough for the Azzurri, as Serbia showed their class in the deciding set. Having conceded an early 3-1 deficit, the Eastern European side clawed back to 4-4. They then took the lead and never looked like giving it up, closing out the all-important set 15-12 to seal their victory.

In the bronze medal fixture, China took apart the Netherlands with ease, winning the fixture 3-0. Despite the loss, Holland’s appearance in the semi-finals meant that three European teams finished in the top four of the tournament and the 2018 edition was the first that featured an all-European final.