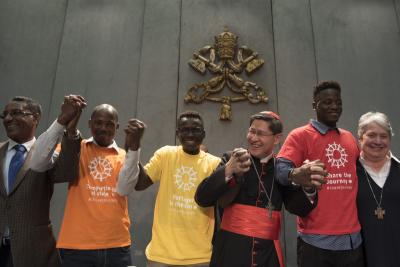 ROME - Cardinal Luis Antonio Tagle, President of Caritas Internationalis, is encouraging communities to oppose fear and hatred by participating in a one kilometre walk alongside migrants and refugees. The so-called “pilgrimage”, scheduled to take place on Oct. 21, will start at the Santa Maria della Luce Church in Trastevere and end at St. Peter’s Basilica.

The walk forms part of Pope Francis’ Share the Journey campaign, launched in Sep. 2017 with the aim of bringing communities closer together with migrants and refugees. Upon the campaign’s launch, the pontiff said, “Hope is the force that drives us to share the journey, because the journey is made jointly: by those who come to our land, and by us who go towards their heart, to understand them, to understand their culture, their language.”

In a publicity video released on Oct.18, Cardinal Tagle said, “In this time of harsh divisions, the big challenge we face is to oppose a rhetoric of fear and hate with actions of love, kindness and mercy, such as the ones proposed in our Share the Journey campaign.”

He continued, “If the wars and poverty in the world today make you feel powerless, take back your power by connecting to migrants and refugees who flee other lands, and listen to their stories. By walking together and talking with each other we recognise a sister, a brother, a neighbour and ourselves.”

The global walk is the latest united initiative promoted as part of the two-year campaign. In June 2018 shared meals with migrants and refugees in communities were organised by Caritas organisations all over the world.