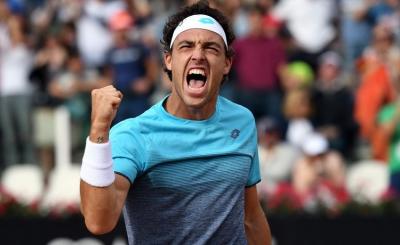 Cecchinato reached the round of 16 at the Shanghai Masters, which came to an end on Sunday, before losing to eventual champion Novak Djokovic. The Shanghai tournament is classed as an ATP 1000 Masters event, which award a greater number of ranking points than any other tournaments in the ATP calendar, other than the four Grand Slams.

His points gained in Shanghai may well have pushed Cecchinato into the top 20, but a number of notable performances earlier in the year have propelled him up the rankings. The 26-year old tasted victory at both the Hungarian and Croatian Open, in April and July respectively, which earned him over 150,000 euros.

However, the high point of the Italian’s season so far was undoubtedly the French Open. Despite being unseeded for the tournament, Cecchinato reached the semi-finals of the Grand Slam, beating top-10 player David Goffin and, most notably, multiple Grand Slam champion Djokovic during his run to the last four. Runner-up Dominic Thiem ultimately got the better of him in the semi-finals, ending a ground-breaking tournament for the Italian.

Cecchinato’s continual rise up the rankings is an encouraging sign for Italian tennis, which has somewhat stagnated since the success achieved by the likes of Sara Errani and Francesca Schiavone in the women’s game.