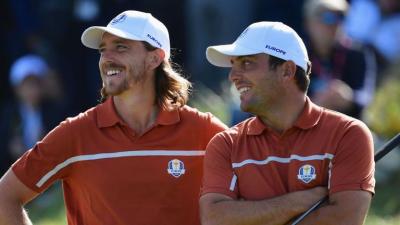 ROME – The record-breaking Ryder Cup partnership of Italian golfer Francesco Molinari and Englishman Tommy Fleetwood have been drawn in the same group for the first two rounds of this year’s British Masters championship.

‘Moliwood’ provided the backbone for Europe’s storming Ryder Cup victory at Le Golf National in September, winning each of their four doubles matches against the Americans. Molinari also added another point during the Sunday singles, making him the first European to ever win a maximum five points in the competition.

The pair are joined at Walton Heath in Surrey, England by Ryder Cup teammate Thorbjorn Olesen, who achieved an amazing five-and-four victory over American star Jordan Spieth on the final day in Paris.

The three are accompanied by a host of other golf stars at the tournament. World number two Justin Rose features in an early group, while victorious European captain Thomas Bjorn partners Vice-captains Lee Westwood and Padraig Harrington.

After such a successful 2018 season, Francesco Molinari will be looking to add to his trophy cabinet, hoping that the sublime form he showed in Paris will carry through to this competition.