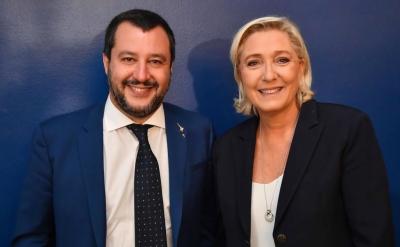 ROME – Italy’s Deputy Prime Minister Matteo Salvini and French far-right leader Marine Le Pen have slammed EU leaders as “enemies of Europe,” declaring a “common sense” revolution will return the EU “back to the people from whom it’s been stolen.”

“The real enemies of Europe are Juncker and Moscovici and all those who are barricaded in the bunker of Brussels,” Salvini said of the EU Commission President and Economics Commissioner during a joint press conference with the leader of French National Rally (formerly National Front) Marine Le Pen on Monday.

Ms Le Pen echoed the far-right League leader’s views saying Lega and Front National do not have a particular aversion to the European Union itself, but to those who lead it - “Europe was built with so many promises that they were soon disregarded. The growth in recent times is the slowest in recent years, we are witnessing a mass migration phenomenon, the fall in the birth rate … they have trampled on the values of freedom, democracy and solidarity.

“In May, we will see an historic moment: a new Europe of nations will emerge, of respect and protection,” Le Pen said, in reference to next year's European elections. “With the help of Salvini, we will install new values, against globalism and unbridled globalization. Matteo is right: Juncker and Moscovici are guilty, but not only them.”

Le Pen supported Salvini when the leader of the Northern League said he did not take classes in economics from a French socialist, referring to the European Commissioner for Economic and Monetary Affairs, Pierre Moscovici - "The European Union had to be created for the people, but it was not like that,” Le Pen said. “It was created to favor a small economic class. It was born on the denial of the population and it is to them that we want to give it back. The EU today has an authoritarian attitude."

“We want to give the power back to the people,” she added.

"The socialists want new slaves to be immediately put to work," Salvini said of migration as he waved a booklet with a picture of an Italian flag and a map of Africa. He explained that it is a draft of "Project Africa" ​​which aims to "give a future to African children without forcing them to escape on a boat.”

“We will really help the Africans, we will show it to the left-wing talkers," he said.

The proposal also has the support of the Front National, which is also keen to oppose the "creation of new slaves" - "We want to cooperate with African countries. The left, however, has an inhumane view of migration,” Le Pen said.

“It doesn’t wait for these people, who are coming from different worlds and cultures, to integrate. They put them immediately to work, they exploit them,” she said.