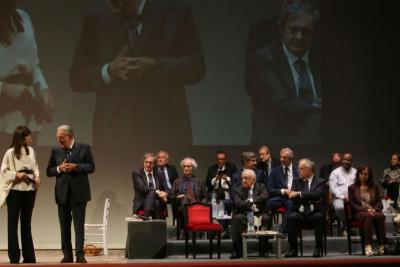 Last year's recipients on stage at the awards

COSENZA – On Friday evening, Calabria will host an evening celebrating Mediterranean culture, and awarding those who have contributed significantly towards it.

The 12th edition of the ‘Premio per la Cultura Mediterranea’ has been organised and supported by La Fondazione Cassa di Risparmio di Calabria e di Lucania and will take place at the Alfonso Rendano Theatre on Oct. 5.

The event aims to recognise the many contributions towards the study and awareness of the variety present within Mediterranean culture, as well as championing dialogue between these different expressions of culture. Additionally, it seeks to promote collaboration between Calabria and Lucania in all aspects of creativity, specifically among young people.

In order to fully appreciate the work and effort shown in pursuit of such goals, a variety of awards will be presented at the event. Winners from seven different categories are to be announced, each of whom has made significant contributions to the furthering of Mediterranean culture.