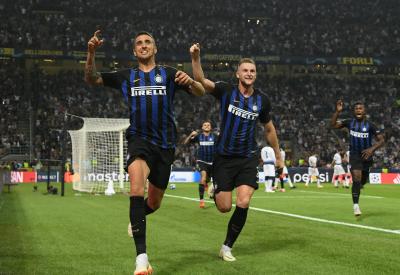 ROME – In front of a sell-out crowd at the San Siro, two late goals saw Inter seal a dramatic victory on their return to Champions League football after 6 years in the wilderness.

Mauro Icardi drew the hosts level on 85 minutes, before Matias Vecino headed one home late in injury time to give Inter a precious victory and a perfect start to their European campaign.

After a first half that was lacking in quality, the match came to life after the break, sparked by Christian Erisken’s strike early in the half. Having won the ball 30 yards out from goal, the Dane surged forward, took a shot that was saved by Handanovic, before latching on to the rebound and firing home. The Inter defence may have counted themselves unlucky, however, as the ball ballooned up off a deflection, with just enough on it to dip over the goalkeeper’s outstretched hand into the back of the net.

With Inter searching for an equaliser, the game opened up significantly, but the majority of the chances fell to the visitors, who will rue a number of missed opportunities to put the game to bed. As the game continued and Inter tired, they were a yard or too short on the press, giving Spurs plenty of comfortable possession. The inclusion of Lucas Moura after 64 minutes only made matters worse, as he stretched the Inter defence, providing a number of good chances for Harry Kane and Eric Lamela to seal the game. Neither found the net, largely thanks to a series of excellent saves from Handanovic, who single-handedly kept his team in the tie for large portions of the second half.

Much had been made of Mauricio Pochettino’s decision to leave both Kieran Trippier and Toby Alderweireld out of his squad entirely, but replacements Serge Aurier and Davidson Sanchez seemed to handle the Inter attack with ease for the majority of the game, the Italians unable to provide any meaningful service for Icardi, who only managed 15 touches all game.

One was all he needed, however, to draw his side level, finding the bottom corner from outside the 18-yard box with a sublime volley, teed up by a Kwadwo Asamoah cross. The game then turned on its head, as the 70,000-strong crowd rallied behind Inter, urging them to find a winner. And so they did, exploiting Spurs’ age-old inability to defend set-pieces. A swinging corner from Antonio Candreva found its way to midfielder Matias Vecino on the edge of the 6-yard box, who completed the simplest of headers to seal the win.

The question remains, however, whether this victory will be enough to propel Inter into a run of form. While fans were heralding the win as a “resurrection” for the club, manager Luciano Spalletti was quick to temper expectations in his post-match press conference. He acknowledged that the win had given his side confidence – “now we believe in ourselves” – but recognised the work that still needs to be done. Icardi and Radja Nainggolan’s connection, in particular, has been identified by the manager as something that is still “lacking”, the implication being that if those two were to find form, the team’s fortunes could quickly turn.

As is often the case, the manager’s considered opinion gave a far more accurate reflection of the game than the fans’ euphoria, and with a challenging run of games coming in quick succession, it is vital that Inter do not get ahead of themselves.

Victory this may have been, but it was far from convincing, and certainly not a performance that will transform a season.