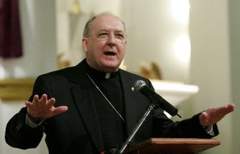 ROME - A new dossier exposes what it claimed is alleged questionable conduct by Kevin Joseph Farrell, a bishop with close ties to the recently accused ex-Archbishop Theodore McCarrick, and the highest-ranking American in the Curia, The Fatto Quotidiano said on Wednesday. Following the accusation by Archbishop Carlo Maria Vigano against Pope Francis for allegedly covering up abuses committed by ex-Archbishop Theodore McCarrick, another bombshell is due to hit the Vatican regarding the U.S. prelate, said the newspaper.

Bishop Farrell, the Prefect of the Dicastery for the Laity, Family and Life, was nominated by the pontiff to the post in 2016 and is in fact the highest ranking American in the Curia, the central government of the Church. Monsignor Farrell was nominated auxiliary bishop in Washington when McCarrick himself wanted him as deputy, and the Prefect and the ex-Archbishop were allegedly part of the pope’s inner circle. Moreover, the two shared a flat for many years; Prefect Farrell likely knew about the wrongdoings of ex-Archbishop McCarrick, the newspaper asserted. There was no immediate comment from Bishop Farrell.

Francis on Monday recommended silence and prayer to contrast with “those who seek scandals.” During his Mass celebration in the Vatican he stated that “The truth is mild and the truth is silent against people who seek scandals, people who seek division and destruction. The only path is the one of silence and prayer.” The pope and the Secretary of the Vatican state are usually aware of all ongoing reports and trials opened by the Congregation for the Doctrine of Faith, the highest court of the Holy See. The pope stated he “won’t say a word” regarding the alleged lifting of sanctions on McCarrick.

Historian Roberto De Mattei, a Vatican expert, stated that the relationship between McCarrick and Farrell was known, yet never made clear by Vatican authorities. “Behind the pope and the secretary’s silence more could be hiding. I personally know Vigano, he is judicious and honest. I am certain he is saying the truth. It is likely he knows more.”

In an interview to Il Fatto Quotidiano, history professor Vito Mancuso stated that “the Church is like a yoghurt past its sell-by date, its outdated.”

Mancuso, one of a constellation of conservative critics of the pontiff, said Francis “is not proving fit enough to free the Church; an egocentric hierarchy, swarming with power, where the clergy drown his mission in scandal.”