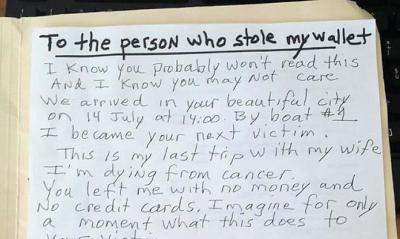 ROME - Dying of cancer, having just arrived in Venice for his ever last holiday with his wife, Micheal Valey was robbed by one of the many thieves who stalk the streets of the city and left an open letter in response, police said on Thursday.

The seventy-year old American wrote that “This is my last journey with my wife. I’m dying of cancer”, in an open letter addressed to whoever stole from him. This unknown person ruined his last ever trip, making his city of dreams become a nightmare. The American pardoned the shameless thief, but wanted to make clear to him the damage he had inflicted.

The incident took place last Saturday. Valey realised he had been robbed leaving the station that had brought him to San Marco; his wallet, containing around 300 euros and all his credit cards, was no more.

The man paid a visit to the police force where he made a complaint and where the Carabinieri made note of his story. A familiar routine for the all the unfortunate tourists in Venice that will never see what they have lost again.

In response to the incident, the Venetian mayor Luigi Brugnaro tweeted that “We have contacted Micheal Veley to give him our sympathy. Unfortunately, he was already out of Italy, but when he returns we will welcome him and his family to Venice with an all expenses paid holiday.”

In the letter, the signor Valley addressed the robber with a sort of plea. “To whoever robbed my wallet,” the letter began, “I know that you probably won’t read this and and I know you may not care. We arrived in your beautiful city on July 14 at 14:00. After my first boat ride I became your next victim. This is my last trip with my wife. I’m dying from cancer. You left me with no money and no credit cards. Imagine for just a moment what this does to your victims. I pray that you distance yourself from this sin that harms innocent people and I forgive you. Micheal Valey, Usa.”