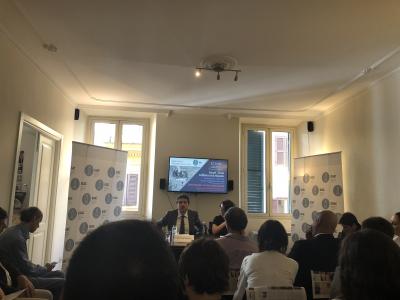 ROME – As part of a series of lectures on ‘The Middle East in crisis’, Dr Jean Loup Samaan spoke on Wednesday at the Euro-Gulf Information Centre in Rome about the Israel – Iran collision in Lebanon, highlighting how the historical conflict has been escalated by the Syrian War and offers no hope of diplomacy.

Samaan, Associate Professor in strategic studies at the National Defence College in Abu Dhabi, UAE, was introduced by Cinzia Bianco as an expert on the region and in strategic and military affairs. He described the confrontation as one of the key concerns of the international analyst community for international diplomacy and offered his predictions for the future.

The conflict between Israel and Iran has been an important topic for decades, yet in the last seven years the confrontation in Lebanon has been less frequently reported. As a researcher he has observed that in the region, although historically a conflicted area, the rules of the game have evolved significantly through different phases.

In the eighties, Lebanon was a good starting point for Hezbollah, the political party serving as a proxy for Iran in the Iran-Israel conflict, to spread the model of their regime across the Middle East. The Hezbollah regime was in this way opportunistic, seeing Lebanon as a perfect target in light of the preceding civil war and impoverished Shia community in Iran whilst Iran was fighting with Iraq.

Originally, Hezbollah was seen as a terrorist organisation in Europe; in the eighties they drew on many terrorist tactics such as suicide bombing. However, there was a change in their strategy in the nineties, which relied instead on sophisticated guerrilla warfare and rockets.

In response, Israel has tried and failed to destroy the movement many times with military interventions and strikes, recently in 1993 and in 1996 with the 33-day war. Each time the operation failed intensity grew, with more fire power and more damages, yet there was a shift in 2006; having never fought a war for so long with an Arab country, Israel reached an understanding with Hezbollah that nether could win another conflict, bringing a new rhetoric that the status quo should be maintained. This delicate situation, not of peace but of stability, based on threats yet also on understanding, has prevailed from 2006 until today.

However, since the start of the Syrian war in 2011 and the presence of both Hezbollah and Israeli forces in the country, the rules have changed. The Hezbollah regime have improved their military skills and been confronted with the potential new front of the golden area of the Gollan, where their military presence increased. Israel, initially cautious in Syria, increased their air strikes. The beginning of Assad’s presidency in Syria also had a tremendous impact on the way Israel received long-term conflict with Iran.

This hindsight from the 80s is crucial. The upcoming conflict between Iran and Israel is frequent in the media, and although until today there has been a de-escalation on both sides, there are many unknowns for the future.

The Hezbollah that entered Syria is vastly changed from the Hezbollah of today; they have suffered major casualties to around one third of their forces, the death of political leaders, and troops have less military training. Some argue that the party is slowly withdrawing forces from the war-torn country and its possible the regime had not envisioned a seven-year commitment. Despite their losses, the last elections reveal that Hezbollah is stronger politically, with more military control in the South, and in Lebanon they have also acquired communications with operations abroad.

Israel is similarly increasing its military response and does not consider any diplomatic relations credible. They hold the view that Iranians are liars, having hidden facilities for years, echoing Trump’s rhetoric that diplomacy will never work with them and that diplomacy here has no momentum.

Finally, Samaan highlighted how it is difficult to predict how the US administration considers its position; although Trump left the Helsinki summit this year positively, suggesting relationships are stronger, the US is very vocal with their desire to put pressure on battlefronts, and serious consequences will ensue if Trump decides to put pressure on Hezbollah in Lebanon.

Within all the confrontation, it will be easy for any of the key actors to escalate the situation. Italy is taking command of UNIFIL (United Nations Interim Force in Lebanon) at the end of August, and this instrument of defence diplomacy will keep channels of communication open. Although it is unrealistic to think of peace at this stage, it will be realistic to keep the status quo.

The war in Syria itself started in villages, in an unstructured way, and then became regional. Thus, even if regional actors reach an agreement, on a local level there could still be ongoing fights, suggesting it will be impossible to see peace in Syria.