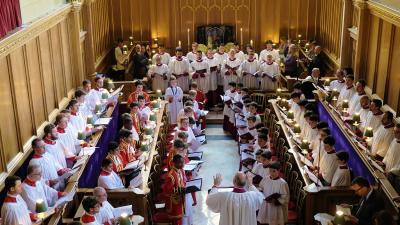 VATICAN CITY - The managing director of the Sistine Chapel Choir, the oldest Church choir in the world, reportedly has been suspended following an internal Holy See investigation into alleged financial mismanagement of the venerable institution's accounts, Vatican sources said Tuesday.

The Fatto Quotidiano newspaper quoted sources as saying that investigators suspect "considerable sums" missing from the Pope’s Choir  accounts that signatures of officials of the Secretary of State have been forged in the account files.

The internal investigation has been entrusted to the apostolic nuncio, Archbishop Mario Giordana, who has so far questioned the director of the choir, Monsignor Massimo Palombella, the managing director, accountant Michaelangelo Nardella, and all of the adult singers and the parents of child singers. So far only Nardella has been suspended.

A Vatican spokesman said he couldn't immediately confirm the Fatto report but Vatican sources confirmed to the Insider that an investigation had been opened under Mons. Giordana and that Mr Nardella was suspended pending its outcome. The sources were unable to say whether Mr Nardella still is in Italy.

The choir’s U.S. tour which was scheduled from July 1-26, was cancelled abruptly 'for logistic reasons.'

Fatto quotidiano reported that “all trace of Nardella has been lost… and he fled with his family to America while awaiting the outcome of the investigation.” Later on Tuesday, a lawyer acting for Mr Nardella issued a statement strongly denying most of the report, describing it as “absurd, gravely damaging and absolutely baseless.” The statement claimed that Mr Nardella was still in Italy and not in the United States.

The actual whereabouts of Mr Nardella has not yet been confirmed. He and his family live in a 400 sq M apartment in the centre of Rome belonging to the Vatican, in a building where the choir has its headquarters. Mr Nardella denies that his wife, a psychologist, converted a former chapel in the flat into her office as Il Fatto reported.

On May 18 the choristers sang in Buckingham Palace at an ecumenical concert against the persecution of Christians around the world. Being over 1500 years old, the Pope’s Choir is the oldest choir in the world; since the beginning it has been considered an instrument for ecumenism and dialogue among Christian confessions.