Tackling the theme of Truth in Italy today 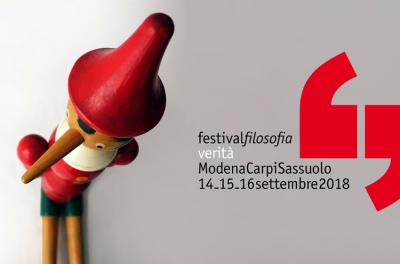 ROME - The philosophy festival ‘festivalfilosofia’ is to take place this year over three days from Sept. 14-16 in Modena, Carpi and Sassuolo on the theme of ‘truth’.

Running for the 18th year in a row, the festival is set to be bigger than ever with over 200 free events to go to across the three cities. More than 200 thousand people are expected to attend this highly-anticipated Truth edition organised by the festivalfilosofia consortium.

On Tuesday, the organisers and professors spoke at the Foreign Press Office about the upcoming festival, divulging some of the details about prominent speakers and lectures.

Anselmo Sovieni, the president of the festivalfilosofia committee, insisted upon the relevance of such a festival: “this is an important event for our country. We need culture and we need to tackle themes such as Truth together because such discussions will help us evolve and grow as a country.”

Lectures will be given on topics such as: the relationship between power and truth, the falsification of news, how public opinion is influenced, the gap between saying and doing and the evolution of truth over time.

Past themes from previous years include Beauty and Happiness. Remo Bordei and Tullio Gregory, professors who will lecture at this year’s event, spoke at Tuesday’s conference about the necessity for these discussions to be pertinent, applying philosophy to the present state of affairs in Italy and the rest of the world. The festival aims to inspire “an educated, alert population which is ready to adapt when faced with new dilemmas.”