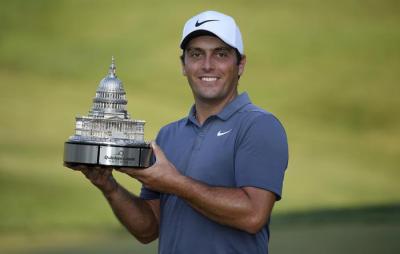 ROME – Francesco Molinari ended Italian golf’s 71-year wait for a PGA Tour title, shooting a final-day score of 62 to finish 21 under par at the Quicken Loans National in Maryland.

The 35-year old saw off competition from Tiger Woods with a stunning decisive round on Sunday to finish eight shots ahead of his rivals and claim victory on the golfing world’s most prestigious circuit. Molinari became Italy’s first success story on US soil since Naples-born Toney Penna won at the Atlanta Open in 1947.

The Italian carded six birdies and sunk a 50-foot putt for eagle at the 10th, effortlessly brushing aside competition as he narrowed in on his first PGA Tour triumph, which joins his five European Tour victories.

“What Francesco has done is phenomenal,” said 14-time major winner Tiger Woods who couldn’t keep up with the pace of the Italian, despite recording his second-best result of the season.

“I told him that the secret is pasta,” Molinari replied. “This victory is special. We hope there are more coming,” he added. “I’m very proud of the way I played, some of my best golf. It is difficult to play better than this.”

The Italian had been weighing up whether to compete in Maryland or head over to the more lucrative French Open as part of the European Tour, but it seems his choice paid off.

“I came here obviously because I was right on the bubble in the FedEx and I wanted to gain a better position, so I guess job done,” Molinari said, emphasising the mental strength he needed to see out victory.

“It was [a big risk], but the risk on the other side was I was 123rd on the FedEx Cup. When you play two tours, you need to balance the two things.”

“It wasn't an easy decision, I thought until the last minute whether to go to France or to come here but seems like it was the right choice in the end.”

Looking to maintain this rich vein of form, Molinari will stay in the US for the John Deere Classic before jetting over to Scotland and turning his attention to The Open Championship at Carnoustie.