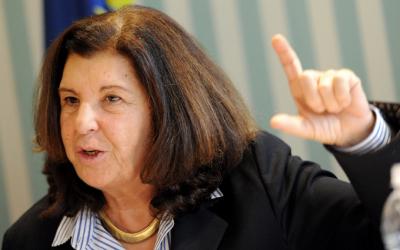 VATICAN CITY -- The disclosure that Italian Justice Minister Paola Severino worked as a lawyer defending the Vatican Bank during a major investigation of alleged money laundering through the coffers of the Holy See has raised questions over whether Prime Minister Mario Monti's Government's will tackle financial abuses by the Roman Catholic Church.

Signora Severino's role acting as recently as last year as attorney for Ettore Gotti Tedeschi, the president of the Institute for Works of Religion (IOR), the tiny city state's powerful bank, was revealed by Il Fatto Quotidiano newspaper, which also published excerpts from a confidential memorandum entitled ‘Memo on IOR-AIF relations’, that was circulated to senior officials including Cardinal Tarcisio Bertone, the Vatican Secretary of State, as a basis for discussion on how to respond to Italian pressure to prevent money-laundering through the Vatican, which is a sovereign state outside the European Union. The memo indicates that the Holy See only plans to increase the level of collaboration between the IOR and Italy with regard to financial transactions from April 2011. “Since the enforcement of the anti-laundering Vatican law on April 1, 2011, various meetings have been held between the IOR and the AIF [the Financial Information Authoritycreated by a new Vatican law], on the one hand directed to show the new authority that initiatives have been undertaken for the adjustment of internal procedures to the measures introduced by the law...,” the memo was quoted as saying.

The Holy See recently promulgated an anti-laundering law, outlined in an Apostolic Letter by the Pope in the form of a ‘Motu Proprio’ published Dec. 30, 2010, aimed at “the prevention and countering of the proceeds from criminal activities and of the financing of terrorism.” Anotations on the memo apparently written by the  Benedict's powerful private secretary, Mons. Georg Gänswein, suggested he was in favour of greater oppenness with the Vatican but encountered resistance from Cardinal Bertone and IOR officials.

Il Fatto points out that while IOR activity may have been more transparent from April last year, several stones remain unturned regarding some of the bank’s earlier, more dubious financial operations.  In September 2010, a scandal erupted when 23 million euros, which were supposed to be transferred from the IOR’s Credito Artigiano account into both the IOR JP Morgan account in Frankfurt and their Banca del Fucino account were frozen by Italian magistrates on suspicion of money laundering. According to Italian prosecutors, the IOR had refused to give particulars about the real source of the money. The Vatican expressed its “perplexity and amazement” at the investigations it was being subjected to.

Following investigations by the Italian Financial Police, a disturbing picture emerged of the IOR’s activity. Fifteen million euros coming from the CEI (the Italian Bishops' Conference) and from some 8000 Italian taxpayers had found its way into the IOR’s Credito Artigiano account. It was also discovered that the IOR had acted as a trustee and its accounts had been used to hide the proceeds of an apparent dirty money recycling operation conducted by two relatives of a Sicilian priest, Don Orazio Bonaccorsi, his father and an uncle who had been convicted for links to the Mafia, Il Fatto reported. Fr Bonnacorsi had an account at the IOR and apparently deposited 250,000 euros in it that his relatives had bilked from the Italian state in Sicily. A court in Catania cleared the priest of money laundering charges in June but prosecutors said they were appealing the verdict.

Signora Severino acted as attorney for the IOR President in the Credito Artigiano affair, presenting arguments for the money to be unfrozen, which initially were rejected by magistrates.

The suggestion that the Italian Justice Minister is unlikely to take a tough line with her former clients in the IOR over moneylaundering follows calls for the Monti Government to curb the massive tax privileges enjoyed by the Italian Catholic Church, notably immunity from paying taxes on the Church's vast property portfolio, especially in Rome, at a time when the prime minster has launched a fierce crackdown on tax evasion by ordinary citizens, retailers and small businesses.

Founded in 1942 by Pope Pius XII, the IOR is a highly secretive institution housed in a medieval tower where employees manage a fortune estimated at over four billion pounds. In March 2010, a witness claimed that former Mayor of Palermo, Vito Ciancimino, used IOR accounts to launder money for the Sicilian Mafia.