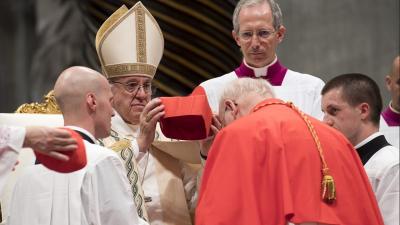 VATICAN CITY – Pope Francis told his new cardinals never to feel “superior” to anyone, to avoid protecting their own power and to embrace their new role through service and love of poverty.  Speaking in St Peter’s Thursday, the pope said that true authority meant being able to follow Jesus’ example of radical service seen when he “did not hesitate to bow down” and wash the feet of his disciples.

“This is the highest honour that we can receive, the greatest promotion that can be awarded us: to serve Christ in God’s faithful people,” Francis explained. “In those who are hungry, neglected, imprisoned, sick, suffering, addicted to drugs, cast aside. In real people, each with his or her own life story and experiences, hopes and disappointments, hurts and wounds.

He reminded the cardinals that the disciples had themselves been caught up in “honours, jealousy, envy, intrigue, accommodation and compromise” as well as “useless and petty discussions,” something which he admitted was present in the Church today.

Instead, he urged them to make serving the marginalised and poverty their goal.

“Dear brother Cardinals and new Cardinals!” he told them. “In our journey towards Jerusalem, the Lord walks ahead of us, to keep reminding us that the only credible form of authority is born of sitting at the feet of others in order to serve Christ.”

He added: “none of us must feel ‘superior’ to anyone. None of us should look down at others from above. The only time we can look at a person in this way is when we are helping them to stand up.”

The pope explained that “change of heart and Church reform is and ever shall be in a missionary key” which avoided simply “protecting our own interests, in order to look out for and protect those of the Father”.

He concluded with the spiritual testament of Pope Saint John XXIII, who convened the Second Vatican Council, the 1962-65 gathering of bishops which set the blueprint for the Church in the contemporary world and whose reforms Francis has sought to implement.

“Born poor, but of humble and respectable folk, I am particularly happy to die poor, having distributed, in accordance with the various needs and circumstances of my simple and modest life in the service of the poor and of Holy Church which has nurtured me, whatever came into my hands – and it was very little – during the years of my priesthood and episcopate,” Saint John XIII wrote.

“Appearances of wealth have frequently disguised thorns of frustrating poverty, which prevented me from giving to others as generously as I would have wished. I thank God for this grace of poverty to which I vowed fidelity in my youth; poverty of spirit, as a priest of the Sacred Heart, and material poverty, which has strengthened me in my resolve never to ask for anything – money, positions or favours – never, either for myself, or for my relations and friends.”

The new cardinals are another sign of the Pope's efforts to make the body that will elect his successor more internationally diverse and representative of Church communities across the world.

In St Peter’s Basilica, he placed red hats on the heads of senior prelates from countries including Pakistan, Japan and Madagascar and Mexico. Eleven of the new cardinals are under the age of 80 meaning they are able to vote in a future conclave.

This is the fifth consistory of his pontificate and means he has now selected 47 per cent of the papal electors, many of them from far flung corners of the globe and renowned for their credible witness to the Gospel in their home countries.

All the cardinals received a red biretta apart from Louis Raphaël I Sako, the Chaldean Patriarch from Iraq, who had a rounder hat known as a "shash" placed on his head, the tradition for Chaldean rite cardinals.

During a press conference yesterday he spoke about the suffering of Christians in his country, although warned the Church against developing a persecution complex.

“The future will be much better than now,” he told  journalists in the Vatican. “Persecution and suffering does not have the last word in the Gospel. Christianity will grow, and the Church will grow.”

Speaking in a mix of English, French and Italian, the new cardinal called for Christians, and all minorities, to be granted “citizenship” in Muslim-majority countries. “We were here before Islam,” he added.

The Iraqi prelate added that there was “something was moving inside” Islam, and said it was up to the Church to encourage reform, support moderate Muslims and continue dialogue.

The decision to make both Patriarch Sako and Archbishop Joseph Coutts of Karachi cardinals represents both the Pope’s concerns for persecuted Christians and a desire to build bridges with the Islamic world.

Speaking to The Tablet, Archbishop Coutts said his appointment was seen as significant for Pakistan with a government delegation flying to Rome in order to attend the the consistory ceremony.

“There’s been a stream of people coming to see me since the news was announced, and they all say the same thing, including my non-christian friends and [state] officials: it’s an honour for Pakistan,” the new cardinal explained.

The ceremony to create cardinals in St Peter's started with an opening prayer and an address to the Pope by Cardinal Sako.

After a short reflection from Francis, each cardinal swore an oath of loyalty to “remain faithful to Christ and his Gospel” and to be “constantly obedient to the Holy Apostolic Roman Church” and “to Blessed Peter in the person of the Supreme Pontiff.”

The new cardinals, dressed in scarlet robes, went up to the Pope and knelt in front of him. Francis then placed a red biretta (or shash in the case of Sako) on each of their heads, gave them the gold cardinalatial ring and a scroll with the title of their new church in Rome. The latter is part of a tradition which links back to the time when cardinals were the parish priests of Rome.

The Pope told them that the scarlet red signifies “your readiness to act with courage, even to the shedding of your blood, for the increase of the Christian faith, for the peace and tranquillity of the people of God and for the freedom and growth of Holy Roman Church”.

While cardinals have traditionally been known as “Princes of the Church” with significant ecclesial – and at times temporal clout – Francis has been keen to emphasise the service element of the office contained in the consistory ritual.

Among the new cardinals is the papal almoner, an ancient charitable office, held by Archbishop Konrad Krajewski, a Polish priest who has given over his home to Syrian refugees and walks the streets of Rome, helping the homeless. “You can sell your desk,” the Pope said when he appointed him. “You don’t need it. You need to get out of the Vatican.” Krajewski, 54, took him at his word.

Many of Francis’s cardinal choices are also Vatican outsiders; they are unfamiliar with the corridors of the power in the Roman Curia and do not speak Italian. This means that everything is set for a future conclave that could again astonish the world, as it did in 2013 with the choice of the Jesuit cardinal from Buenos Aires.

They include prominent figures from the Vatican including Archbishop Giovanni Becciu, the outgoing “Sostituto” at the Secretary of State, and Archbishop Luis Ladaria, Prefect of the Congregation for the Doctrine of the Faith.

This shows a recognition that the Roman Curia needs weighty figures if it is to be run efficiently, and that the Pope is willing to balance his desire for reform with respect for tradition.

Following the formal ceremony in St Peter’s the cardinal then take part in the tradition of “courtesy visits” in different parts of the Vatican where they can be greeted by members of the public. While it is part of a tradition which allowed the people of Rome to meet the new Princes of the Church, today the courtesy visits include hundreds of Catholics from the home countries of the new cardinals who have travelled to the eternal city for the ceremony.

First published on The Tablet