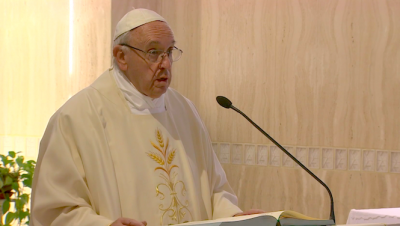 VATICAN CITY – During a mass at Santa Marta, Pope Francis spoke about the root of dictatorships, a reflection that some observers felt was directed at the Trump administration.

In his Monday address, which Italian media have hailed a strong homily, the pontiff recalled the “destructive power of slanderous communication.”

He also said: “Just think of the persecution of the Jews in the last century. A horror that still happens today.”

His sermon started off by narrating the biblical story of Naboth’s vineyard. In this passage, Ahab and his cruel wife Jezebel try to take possession of Naboth's vineyard by using their political power.

The pope outlined how this episode corresponds to what is happening today in various countries. He deliberately remained generic, but equally warned of how “dictatorships adulterate communication.”

He said: "Even today, in many countries, this method is used: destruction of free communication. We think, for example, that there’s a law on media, on communication, that law is erased; the whole apparatus of communication is given to a company, to a society that slanders, says falsehoods, and weakens democratic life.”

"It seduces with scandal,” he added. “Good news is not seductive. And so communication grows, and that person, that institution, that country ends up in ruin. People are not judged at the end. We judge the ruin of people or institutions, because they cannot defend themselves.

“For example, let’s consider the dictatorships of the last century. Think of the persecution of the Jews, for instance. A libellous communication against the Jews; and they ended up in Auschwitz because they didn’t deserve to live. Oh... it's a horror, but a horror that happens today: in small companies, in people and in so many countries. The first step is to appropriate communication, and then destruction, judgement, and death."