Conte and Macron's meeting on migration goes ahead 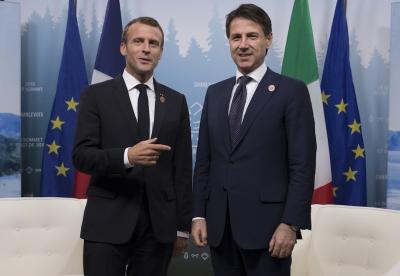 Earlier this week, Conte cancelled the meeting after a disagreement regarding the Aquarius ship carrying 629 migrants on board.

A phone call between the two European leaders, however, ended the diplomatic dispute.

Macron issued an apology saying: "I never meant my statements to offend the Italian people", after describing Italy’s position on migration as “nauseating” and “irresponsible”.

Paris have also said that they’re ready to welcome migrants on board the Aquarius ship, which has had to change its route due to bad weather and is set to dock on Sunday.

They did not specify the exact number of passengers they’ll accept, and also said they must meet the requirements for asylum. This was clarified by French Foreign Minister Jean-Yves Le Drian after an interview with his Spanish counterpart Josep Borrell.

After settling things with the French president, Conte said: "The case is closed, now we need to change the Treaty of Dublin. The solution to the immigration problem cannot be left to Italy alone. We’ll talk about it in tomorrow's meeting."

The French Minister for European Affairs, Nathalie Loiseau, added: "We need to talk to Italy, they’re a great partner, a great neighbour."