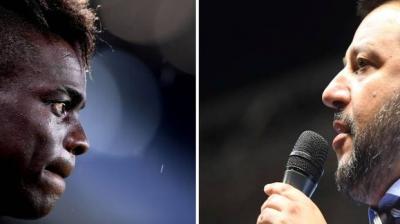 “I was born in Italy, I lived in Italy, I had studied in Italy and the fact that I wasn’t considered Italian until I was 18 was the worst part of my life,” said the Nice striker, speaking at a book presentation which features a chapter about his life growing up surrounded by racism.

Balotelli grasped the need for a shift in attitude amid mounting xenophobic sentiment across Italy: “It was a tough time for me. And in this sense, I would like to make a small appeal.”

Previous attempts to reform the ‘ius soli’ law, led by the centre-left government, were discarded after conservative opposition rejected the proposed changes. The adjustments had hoped to give children citizenship after five years in the Italian school system.

“I’m not a politician, but the law should be changed,” the 27-year-old said.

The leader of the anti-migrant League, Salvini, replied to the maverick striker on Twitter in a disinterested statement, insensitive to Balotelli’s struggles: “Dear Mario, the ‘ius soli’ is not a priority of mine nor of Italians. Good work, and have fun, chasing a football.”

Citizenship rights, is seems, appear low down the Interior Minister’s priority list, instead bogged down in his desire to deport half a million undocumented migrants from Italy.

Salvini recently clashed with political opponents after he overlooked angry protests in Calabria following the murder of Malian migrant, Soumaila Sacko, which confronted the League leader on his hard-line immigration policies.

Salvini’s response? A sarcastic tweet, mocking those who blamed his anti-migrant policies: “#colpadiSalvini” (Salvini to blame), the deputy prime minister posted on Twitter, attaching the link to an article from Il Giornale, with the headline: “Revolt of migrants against Salvini: 'racist, your time is up'.”

Balotelli, who has been linked with summer transfer to Torino joked that the League leader would decide his final destination: “My future? I’ll play where Salvini says.”

The striker previously collided with Salvini in the aftermath of Italy’s heavily drawn-out elections on March 4, which saw the appointment of the country’s first black Senator, Toni Iwobi.

The footballer criticised Iwobi’s “Stop Invasion” rallies alongside Salvini, who hit back at the former Manchester City forward: “I didn't like Balotelli on the field, I like him even less off it.”

The dust is far from settled in this ongoing political duel as Balotelli’s name arises as a contender for captaincy of the national team following his revival under Roberto Mancini.