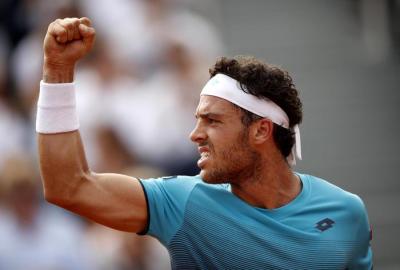 The Italian had never won a main-draw Grand Slam match before this year’s Roland Garros and becomes the lowest ranked player to earn a place in the last four since world number 100 Andrei Medvedev in 1999.

Having won the first two sets, Cecchinato was pinned back by the 12-time Grand Slam winner who rampaged through the third set, but the Italian regathered his feet in the fourth, holding his nerve in as a crucial tie-break finished 13-11.

“When I saw my return hit the line it was the best moment of my life,” Cecchinato said in his post-match press conference.

Djokovic, who called on his physio for neck treatment after dropping the first set, may now be a doubt for Wimbledon, adding to a torrid year of injuries for the Serb.

“I don't know if I'm going to play on grass … I'm just not thinking about tennis at the moment,” Djokovic said, passing on his congratulations to Cecchinato for a superb performance.

With the other two men’s quarter finals being contested on Wednesday, Rafael Nadal remains hot favourite to add to his collection of 10 French Open titles.