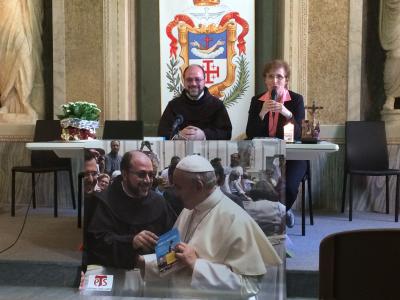 ROME – In the tranquil surroundings of the Holy Land delegation in the Italian capital, the priest of Aleppo, Ibrahim Alsabagh, offered a shattering insight into his first-hand experiences as a priest during the siege of Aleppo. Launching his new book, Viene il mattino (Dawn Approaches), Alsabagh vividly reconstructed the devastating aftermath which has ripped through the war-scarred city, depicting “the reality of those men and women who decided to stay in Aleppo.”

Alsabagh was born in Syria into a Christian family and grew up in Damascus. He started his studies in medicine, but soon realised that his calling was more spiritual and so entered into the order of missionaries at the Custody of the Holy Land in Rome. In 2014 he was appointed as priest and vicar to the bishop in Aleppo, which is where he continues to work. To take on an assignment in a war zone is no easy task; being at the centre of the battle of Aleppo urged him to write about what he had seen and in 2017 he published his first book, Un istante prima dell’alba (Just Before Dawn), which quickly gained recognition, meriting its translation into six different languages.

While his first book was written during the heat of the siege, vivid in its reactionary emotions and portrayal of suffering, Viene il mattino is written from a more “reflective and analytical perspective,” stretching beyond physical suffering into spiritual healing and the philosophy of peace. Although the siege is “over” and missiles no longer rain down upon the city, the fighting and violence is far from over in Aleppo. Many returned to the city in 2017 to resume their lives, but came back to find seventy percent of buildings raised to the ground, no jobs and nothing to eat. Alsabagh’s book follows the slow reconstruction of the city; in a war-torn country it is not the state which funds the restoration, rather it is the institutions such as the Church which save the day. Alsabagh’s order alone has rebuilt 1,200 houses but they are inundated still with desperate requests from many more who lost their homes. “This is not a time of peace: this is recovery” is a statement which he repeated throughout the conference yesterday, a distinction which the book also insists upon; that this long-awaited liberation from war is not in fact real peace.

Another important aspect of the book is the idea that reconstruction is not just a physical process, but it is also an emotional and psychological one. “The human inside has been wounded, and the people of Aleppo need to be rebuilt as human beings.” Alsabagh’s order has been involved with looking after orphans and children who have suffered psychologically from what they experienced, but again, there are so many who need help that the task is more than overwhelming. Often, Alsabagh admits, it is hard to keep the feeling of hope alive.

On considering what the principle motivation for writing Viene il mattino was, Alsabagh said that the book “was born out of the need to share our experience with the outside world;” an urge to call out to Europe, to remind us of the suffering in Syria. Although he thanked the Italian nation for their prayers and humanitarian aid which they have so consistently given, Alsabagh pleaded for us to not grow complacent about the conflict, and instead for every individual to “have the will to make peace.” He insisted that peace is in fact a responsibility which each individual must take upon themselves, that it is a concept only achievable through action rather than standing by. The best possible future can only be “a future of reconstruction in which everyone participates: take responsibility for peace.”

After an emotional encounter with Pope Francis on Wednesday, Father Alsabagh experienced a new wave of hope. The pontiff’s sincerity touched Alsabagh and he took the time to listen to the Syrian priest about the situation in Aleppo, eagerly accepting the book and thanking Alsabagh for the spiritual, emotional and physical help which he gives to so many. Unable to stop smiling from their conversation, Alsabagh went away feeling that flame of hope which had so often been extinguished at home. It ignited the belief in him that Italy could play a powerful role in fighting for peace in Syria.

After Rome, Father Alsabagh will continue on his tour around Italy to promote the book in the run up to the book’s release on June 7 in bookshops in Italy.