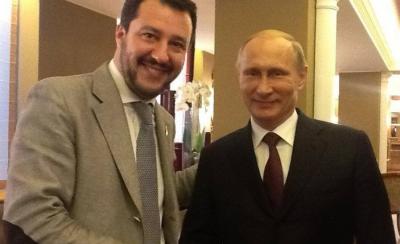 ROME – The League reacted furiously on Monday to accusations from billionaire financier and philanthropist, George Soros, that the far-right Italian party may be financed by the Kremlin, political sources said.

There is “a strong threat and I'm really worried. There is a close relationship between Matteo Salvini and [Russian President Vladimir] Putin,” the 87-year-old Hungarian American said.

“I do not know if Putin actually finances his party, but Italian public opinion has the right to know if Salvini is in Putin’s pay check,” Soros continued.

The enraged anti-migrant League leader strongly denied the allegations: “I have never received a lira, a euro or a rouble from Russia,” Italy’s newly appointed Interior Minister said, adding, “I am ashamed that a speculator like him is invited to speak” at the Trento Festival of Economics.

The deputy of the Democratic Party, Emanuele Fiano, also weighed in on the debate, telling Radio Cusano Campus listeners that “Parliament should have some more certainty about the relations between the League, M5S and Russia,” as the coalition gears up for a vote of confidence in the Senate on Tuesday.

“In recent years,” Fiano added, “Russia has been interested in having relations with parties that have a strong will to change Europe.”

Both the anti-establishment Five Star Movement and the League have demonstrated a sympathetic stance towards the Kremlin, having called for international sanctions, imposed following Russia’s annexation of Crimea, to be lifted.

And Salvini wasn’t afraid to hide his support of the Russian President: “I consider Putin one of the best statesmen [in the world],” he said in reply to Soros’ words.

Soros, however, was clearly anxious of the strengthening bond between the Kremlin and Italy’s new populist government, as well as the long-term threat this relationship conveyed across Europe.

Putin “seeks to dominate Europe; he does not want to destroy it but exploit it because it has production capacity, while the Russian economy under Putin can only exploit raw materials and people,” Soros said.

Yet, the international financier was weary of a reluctance from European countries to cooperate with the M5S-League coalition.

“There is a strong inclination in Europe to use the occasion to teach Italy a lesson,” said Mr Soros, warning that “if the EU follows this line, it will dig its own grave.”