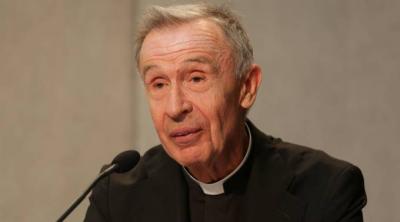 ROME – The radical opposition group We Are Church International (WACI) has strongly rejected Archbishop Luis Ladaria’s claim that the ban on ordaining women to Catholic priesthood has a “definitive character” and “is a truth belonging to the deposit of faith.”

Ladaria, 74, further outlined that Jesus’ intent was clear when he bestowed the sacrament of ordination on “the twelve apostles, all men, who, in turn, communicated it to other men.”

The Spanish Archbishop, who will be elevated to the order of Cardinals on June 29, then added that challenging this teaching “[…] creates serious confusion among the faithful, not only about the Sacrament of Orders as part of the divine constitution of the Church, but also about the ability of the ordinary magisterium to teach Catholic doctrine in an infallible way."

His claims quickly sparked criticism from Colm Holmes, Chair of WACI, who said: “Archbishop Ladaria’s attempt to invoke Jesus to justify the continued exclusion of women from church ministry and leadership is a distortion of our faith. The claim that patriarchal structures have divine origins and that women’s second-class status is sanctioned by God is a fallacy perpetuated by the celibate male clerical class. It undermines the church’s social justice work around the globe and puts the lives of women and children at risk.”

Holmes noted: “The ordination of women is supported by majorities of Catholics in many nations, including Argentina, Brazil, France, Italy, Spain, and the US. Catholics understand that God’s call to service and leadership transcends gender, and know that women are entirely capable of ordained ministry.”

He then added that, “The inequality of women in the Catholic church is a matter of intense global conversation at the moment.” To highlight his point, he mentionted former Irish President Mary McAleese’s recent and well-regarded address at the Voices of Faith convention in Rome on International Women’s Day, where she said: "the Catholic Church has long since been a primary global carrier of the virus of misogyny. It has never sought a cure though a cure is freely available. Its name is “equality”’.

“Catholic women and the men who support them are pushing back against policies and teachings that reinforce misogyny and discrimination. Archbishop Ladaria’s ill-advised comments are another example of the hierarchy’s desperate effort to maintain its status as an all-male power block. However, as we are seeing around the world, time is up for such exclusion and injustice.

WACI has been promoting women’s equality in the Church for a long time now. The organisation supports all efforts to open up ministry and decision-making roles to female counterparts, but sees the current Vatican direction as "ineffective" and problematic.

We Are Church International (WACI) founded in Rome in 1996, is a global coalition of national church reform groups. It is committed to the renewal of the Roman Catholic Church based on the Second Vatican Council (1962-1965) and the theological spirit developed from it.

Flavia,
You really only gave justice to one view on the subject. Archbishop Ladaria explained that having men priests is a part of the deposit of faith, the magisterium. St Pope John Paul not shy about making changes in the Church said, "I do not have the authority to change this".
Well, there is more to it. When the priest says Mass he is a stand in for Christ. That is paramount because the Sacrifice of the Mass is a reenactment of the sacrifice of Calvary a reenactment of the Last Supper.
There are those who have lost sight of what is specifically Catholic about the Mass. It is worship and it is a sacrificial reenactment.
They emphasize it as a communal meal. And since the Mass is only a meal then why not let Secular ideas of equality and female victimization rule?
There is more to it and it does involve core beliefs that come directly from how Jesus instituted his Church.