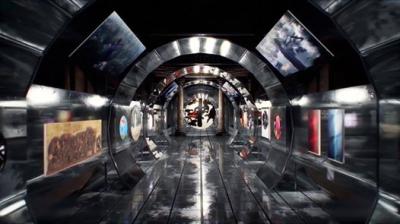 New Flight to Solaris project at the Fondazione Zeffirelli

FLORENCE - The New Flight to Solaris project, which we will be displayed from 28 May-31 July, combines Soviet nonconformist artists from the AZ Museum in Moscow, the private collection of Natalia Opaleva and the chef-d'oeuvre of the Russian film director Andrei Tarkovsky. It will be the Fondazione Zeffirelli's first international project, ever since the museum was opened to the public on October 1, 2017.

The New Flight to Solaris is the final of the exhibition trilogy, whose first two parts, based on Tarkovsky's films Stalker and Andrei Rublev, were presented by the AZ Museum in Moscow in 2016 and 2017 respectively.

In Andrei Tarkovsky’s film Solaris, earth artifacts chosen by Tarkovsky for life on a different planet are collected. For the exhibition the AZ Museum has gifted art works from Tarkovsky’s colleagues, members of the Soviet artistic underground of the 1960s—1980s, that would be congenial to his work. Using the director’s idea as an artistic mold, Polina Lobachevskaya has organized a futuristic installation of a space station, ready with 22 screens to show video art based on unique photographic and cinematic materials. As well there are works of Russian artists of the later 20th century.

Franco Zeffirelli, born in Florence is a global icon within the art world. Andrei Tarkovsky, a world-famous Russian director, lived in Florence after leaving the Soviet Union. The aggregation of these two men at the San Firenze Palazzo paves the way to admire the continuation of a cultural relationship between Italy and Russia, and Russian and European culture. Science fiction and cinema lovers will come together to

The AZ Museum although a young museum, is emerging quickly and gathering respect from a range of art connoisseurs. It was founded by the collector and art patron Natalia Opaleva and curator Polina Lobachevskaya who deals with all the publishing and exhibition ventures. The main objective for the museum is to enliven the heritage of unofficial Soviet artists of the 1960s through 1980s with original curatorial concepts, new technologies and an active dialogue with modern art.

The Franco Zeffirelli Foundation in Florence is a space for specialists and spectators to learn about the legacy of Maestro Franco Zeffirelli. The museum contains over 300 items related to Zeffirelli’s artistic pursuits.  Apart from this permanent exhibition, the San Firenze premises also offers exhibitions dedicated to the most outstanding artists of the world, as well as theater and cinema adaptations which Zeffirelli had worked on.

The 1960s through to the 1980s, the time when Tarkovsky was creating his movies, was a Soviet Renaissance where new avant-garde paintings, drawings and sculptures emerged. Each of these artists came together with Tarkovsky through the means of historical time, an innovative approach to solving art questions and an unconquerable drive towards freedom.