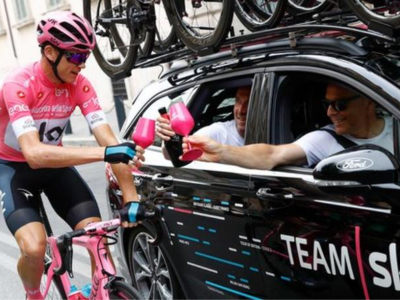 ROME – Chris Froome cemented his place as one of the greatest cyclists of all time, sealing the Giro d’Italia title in the sweltering streets of the Italian capital to become the first British rider to win in Italy.

The final day in the Eternal City had largely become a processional stage as Froome, 33, had turned around the gruelling Tour with a stunning ride at stage 19.

The British rider became only the third cyclist in the sport’s history to win three consecutive Grand Tours following victories at the Tour de France and Vuelta a España.

“For any cyclist, this is the dream to have all three leader’s jerseys in the space of 10 months,” Froome said, after finishing 46 seconds ahead of the Giro’s defending champion, Tom Dumoulin.

Frenchman, Bernard Hinault, was the last rider to complete the astonishing triple crown, back in 1983, following in the footsteps of Eddy Merckx’s success in 1971.

Questions, however, cloud over Froome’s victory in an ongoing anti-doping ruling, dating back to last year. The British cyclist has been rigorously interrogated throughout the Giro, even being spat on by a spectator at stage 19, whilst engravers lightly etch his name into the history books.

Froome has consistently denied the allegations, insisting that he has a “clear conscience” as cycling tries to clean up what has become a murky sport.