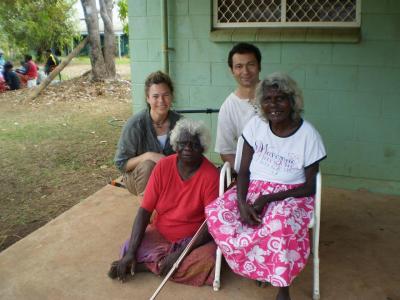 ROME - May 29 will be Australia Day at the Vatican Ethnological Museum because a hefty, handsome, illustrated volume on Australian aborigines is to be launched there.

The volume Australia has 18 essays by aboriginals and white people on controversial topics such as native land title, self-determination, constitutional status and the neglected subject of what white and aboriginal communities share.

A little-known aspect of the Vatican Museums is that over half their holdings are non-European. The Ethnological Museum’s collection is from Asia - such as sophisticated Islamic ceramics and Chinese statues - as well as artefacts from Africa, Asia, the Americas, and Australia and the Pacific islands.

The Ethnological Museum, now renamed ‘Anima Mundi’, is careful to separate itself from cultural colonialism.

“We display gifts which were freely offered” says Father Nicola Mapelli, its 46-year-old Italian Director. He was a missionary of the Pime (Pontificial missionary Institute) order in the Philippines for a decade before completing a PHD in ethnology at the La Sapienza State university in Rome.

In 2009 he was made Director of the Museum which had been virtually closed for the previous 40 years because of inadequate temperature and humidity controls. He took advantage of the canonisation of Mary MacKillop in 2010 to organise an exhibition in collaboration with the National Museum of Australia. There was a conference on aboriginal spiritualty attended by over 30 aboriginals and a memorable reception with Aboriginal and Torres Straits islanders dancing in the Vatican Gardens.

Afterwards extensive renovations were made to the Museum including installation of large windows which ensure it is flooded with light. It abuts in the Vatican Gardens where it sometimes holds receptions. The renovated museum of 7000 square metres was inaugurated in 2016.

Its permanent collection dates from 1691 but received a big boost after Pius XI invited peoples in mission territories to send artefacts to Rome for an exhibition during the 1925 Holy Year-  Over 100,000 artefacts arrived: 60 per cent were returned and the remainder augmented the Museum’s collection.

Mapelli is keen to collaborate with indigenous peoples. For instance, with Katherine Aigner, an Australian curator, he visited many aboriginal communities in Australia to get their assent to display of their ancestors’ artefacts.

In 1948, Warwick Dix, then head of the Aboriginal Institute in Canberra, after inspecting the Vatican’s Aboriginal Collection, certified that there were no human remains even though some the holdings date from the 1840s when Spanish missionaries at the New Norcia monastery, Western Australia, sent aboriginal materials to Rome.

Now the Australian Collection has what Mapelli calls ‘the pride of place’, because it is situated first of the museum’s permanent collections.

"This is a unique collection,” says Katherine Aigner who divides her time between Rome and Canberra.

As well as indigenous studies at the Australian National University and editing catalogues – including The Americans on the indigenous American artefacts in the Ethnological Museum - Katherine has made  documentary films, including  Atomic Confessions on the 12 British nuclear bombs exploded in Australia.

She curated the permanent Australian display as well as editing the volume on the Australian collection. Unlike other corridors, the Australian two are kept dim to enable spotlighting of the exhibits. The burial poles from Melville island, have as their background a wall-sized video of a tropical beach washed by waves whose sound can be heard. In a flanking display case are body ornamnents and objects, such as a painted, metal hachet for pole cutting and double-barbed spears using during the lengthy wakes.

Also displayed are some of the distinctive rock art produced in the Kimberley ranges for over 40,000 years as well as more contemporary work such as an elaborate head dress from the Torres Straits and paintings by contemporary artists.

“Indigenous people everywhere are under increasing pressure because of demands on their land and resources - many are seeking help in facing climate and social change” says Katherine. “In Australia, Aboriginal leaders fight for their spiritual and cultural interests, for heritage protection, preservation and promotion. John Paul II spoke powerfully for them during his 1986 visit.”

She pointed out that Pope Francis has supported the indigenous of Argentina.

The Museum began with two masks sent to it, at the end of the 17th century, it by missionaries among the Kogi people of the Sierra Nevada in Colombia.

“The masks are intermediaries in the Kogi rituals to maintain a balance with nature. The Museum wants to increase connection with these and other peoples’ lifestyles. I was involved in dialogue with the mask makers’ descendants who need help in facing climate change - the diminishing snowfalls in the mountains which rise over 5000 metres.”

The Australian Catalogue is another example of the Museum’s policy of collaborating with the peoples who produced its artefacts. It is jointly published by the Vatican and the Institute for AborigInal and Torres Strait island Studies in Canberra. 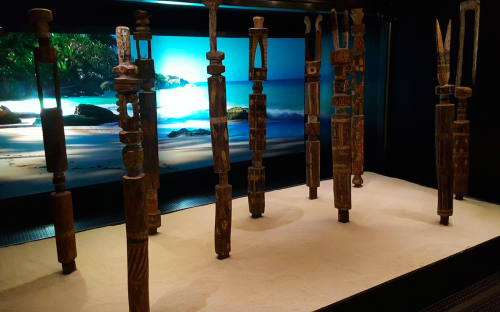