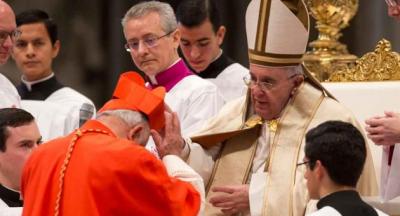 The surprise announcement was made on Sunday following the pontiff’s Regina Coeli address to pilgrims and visitors gathered in St. Peter’s Square.

The churchmen come from 11 different countries, including Iraq, Pakistan, Japan, and Madagascar. Francis conveyed that this international body of clerics will “express the universality of the Church, which continues to proclaim the merciful love of God to all people on earth.”

He also emphasized that they're men who’ve “distinguished themselves for their service to the Church”.

The first cardinal to be announced was Chaldean Patriarch Louis Raphael I Sako, 69, an Iraqi who openly denounces the suffering his people have endured since the U.S. invasion in 2003.

The Pakistani Archbishop of Karachi, Joseph Coutts, 72, will also be elevated to the position of cardinal. By promoting these two churchmen, Francis is sending a strong message of support to minority churches, given that Catholics in Pakistan and Iraq have repeatedly faced death and discrimination in recent years.

The Polish Archbishop, Konrad Krajewski, 54, who is the Vatican’s papal almoner, will also received a red hat to emphasize the pope’s focus on the poor. Archbishop Krajewski is known for helping and working closely with Rome’s homeless. He's even given up his flat to Syrian refugees in the past.

Eleven of the new cardinals are under the age of 80, which means they’ll be eligible to cast ballots in the future secret conclave that will elect Francis’ successor.