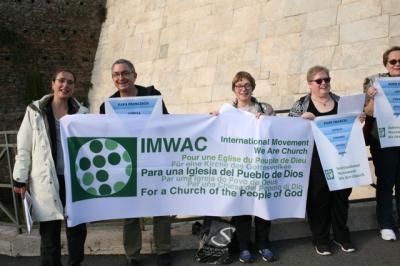 We Are Church International (WACI)

Rome – Leaders of the radical opposition group, We Are Church International (WACI) have expressed serious concerns about the expansion of the Vatican Dicastery for Laity, calling them “ineffective” after they failed to include deepened reflections on the role of women within the Church.

This reaction was prompted after new statutes issued by Pope Francis took effect on 13 May.

Colm Holmes of Dublin, Ireland, Chairperson of We Are Church International, said, “It is certainly critically important that the Vatican reflect and take action on the oppression women experience in our Church and in most cultures. However, putting this responsibility under the direction of the very man who recently banned at least two equality-minded women from speaking at the Vatican raises doubt that real progress will be possible.”

“In addition, couching the consideration of women’s roles in the traditional Vatican language of ‘the relationship between men and women in their respective specificity, reciprocity, complementarity and equal dignity’ and ‘feminine genius’ indicates a tenacious commitment to the very beliefs that put women in a second class status.”

Holmes continued, “We Are Church International calls on Pope Francis to establish a Dicastery for Women’s Equality. As former Irish President Mary McAleese pointed out in her remarkable address on International Women’s Day earlier this year, the Catholic Church needs to stop spreading the virus of misogyny and inequality throughout the world. A separate dicastery with a clear mission of dismantling the structures of oppression that result from Church teachings and practices is a necessary first step.

“We believe this Dicastery should be led by a team of directors, women and men, who can work collaboratively, modeling a new form of ministry and leadership at the Vatican. Their first mission should be to travel around the world, listening to women about their lives, their faith, and their relationship with the Church with no closed doors. What they learn should inform the Dicastery’s ongoing work of discerning the work of the Spirit.”

WACI has been promoting women’s equality in the Church for a long time now. The organisation supports all efforts to open up ministry and decision-making roles to female counterparts, but sees the current Vatican direction as "ineffective" and problematic.

We Are Church International (WACI) founded in Rome in 1996, is a global coalition of national church reform groups. It is committed to the renewal of the Roman Catholic Church based on the Second Vatican Council (1962-1965) and the theological spirit developed from it.