Monsignor Pizzaballa fears Jerusalem violence is "not over" 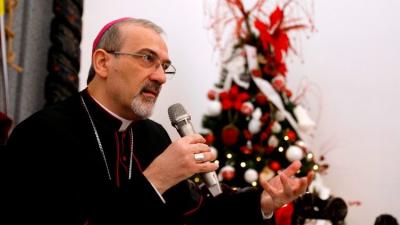 ROME – The Apostolic Administrator of the Latin Patriarchate, Monsignor Pierbattista Pizzaballa, has called for a period of fasting and prayer after the violence that led to the deaths of dozens of people following the relocation of the US embassy in Jerusalem.

During an interview with the Tg2000 and TV2000 newscast on Tuesday, he said: "In this period of Pentecost we will pray and fast for peace. And next Saturday the whole Diocese will hold a prayer vigil ".

"Hatred and violence,” added Msgr. Pizzaballa, “can be defused only through dialogue. I realise that talking about dialogue right now is something far from the real situation. We as a Church have decided to release limited press communications because they’ve all become the same now. We could easily make a photocopy of those we made a short while ago".

"Yesterday,” underlined Msgr. Pizzaballa, “was a very sad day. Unfortunately it is the latest episode in a long journey of hatred and violence that has seen the deaths of nearly 60 people, and thousands injured."

“It’s also a paradoxical situation because on the one hand, there were those who celebrated the transfer of the US embassy, while on the other hand there was tragedy and massacre. It’s a picture that speaks well of the paradoxical and dramatic situation of enormous distance and separation that's present in this terrible and interminable conflict."

"The dialogue between Israelis and Palestinians,” concluded Msgr. Pizzaballa, “has been non-existent for a long time. The lack of dialogue, the deep mistrust that has formed between the two parties, and the hatred and resentment have resulted in the umpteenth episode of violence that unfortunately I fear is not over".

To see the full interview follow the link https://youtu.be/PiMNAAKXVBw