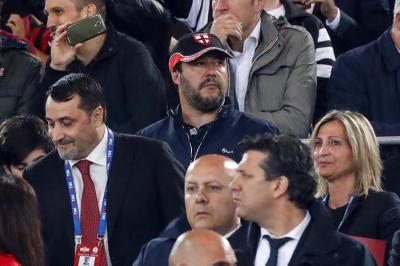 ROME – Amongst an assortment of well-dressed celebrities and politicians in the Stadio Olimpico’s VIP section, one man stood out; the League leader, Matteo Salvini, opted not for a shirt and tie, but instead a neo-fascist CasaPound-branded jacket.

Salvini appeared at the Coppia Italia final between Juventus and AC Milan sporting his Milan cap along with a blue jacket, clearly marked with a white ‘Pivert’ logo across his chest, images revealed on Thursday.

Pivert clothing, described as the “commercial rib of CasaPound” has been frequently worn by young, extreme right-wing activists. The designer company boasts strong connections to CasaPound since its owner, Francesco Polacchi, is a well-known leader of the neo-fascist movement.

A collection of stylish politicians, including the President of the Senate, Maria Elisabetta Casellati, were geared up to face the cameras, seated in the limelight before photographers, hoping to capture images from the stands.

Images erupted across social media, rekindling links between the Salvini-led League party and Iannone and Di Stefano’s CasaPound, who have been labelled “fascists of the third millennium.” The parties had rallied together against immigration across Milan and Rome back in 2014-2015, campaigning under the slogan of “Italians first.”

Deputy leader of the Democratic Party, Michael Anzaldi, wasn’t restrained in his criticism of the League leader either, warning Di Maio against their increasingly likely government alliance. Anzaldi branded Pivert as a “CasaPound satellite company,” saying that Salvini “immediately sends a signal to his world of reference.”

However, CasaPound leader, Simone Di Stefano, endeavoured to play down the significance of Salvini’s Pivert jacket selection. “The brand is widespread; it is not for the exclusive use of extremist right-wing environments,” Di Stefano said, adding that “many activists of so-called sovereign movements prefer that brand because it is completely ‘Made in Italy’.”