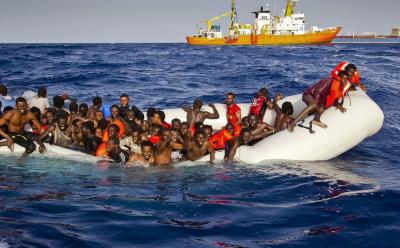 ROME  - Survivors of a migrant shipwreck are taking Italy to court after their work with the Libyan coastguard led to grave violations of human rights, officials say.

The 17 migrants appealed to the European Commission of Human Rights (ECHR) on Wednesday after they suffered “inhuman and degrading behaviour” on 6 Nov 2017.

The lawsuit is based on the account of these survivors, who recall how the NGO vessel, Sea Watch, was obstructed by Libyan militiamen as it tried to rescue 130 of them from a sinking dinghy.

At least 20 people died in the incident, including two minors.

The rest of the survivors were reportedly “pulled back” to Libya, where they were locked up in inhumane conditions and suffered beatings, rape and hunger. Two of them were electrocuted.

During a press conference, lawyer Asgi Loredana said: "We’ve revealed numerous human rights violations. Everyone’s right to life was violated - two of them even lost their life - as well as the right to not suffer inhumane and degrading behaviour".

This case could jeopardise the agreement signed between Italy’s centre-left government and Libya in Feb 2017, under which Italy agreed to train, equip and finance the Libyan coastguard in an effort to return migrants to Libya.

The deal was praised by European leaders and credited with lowering the number of migrants arriving to Italy’s coastline, however, it has since come under scrutiny. It has also led to various clashes with NGO's, who've reportedly been threatened with violence in some rescue operations.

The Global Legal Action Network has decided to represent the foreigners before the European Court of Justice.

With regard to Italy’s responsibility, legal advisor, Itamar Mann, said: “They're putting migrants’ lives at risk and exposing them to extreme forms of ill treatment by pulling them back to Libya by proxy.”

“We hope this new case will serve to establish the key principle that so-called ‘pull-backs’ are contrary to basic human rights standards.”

A video captured by the NGO vessel Sea Watch has also been collected as evidence. In the film you see the migrants abused and mistreated; a militant even drops one of the men trying to get on board into the sea.