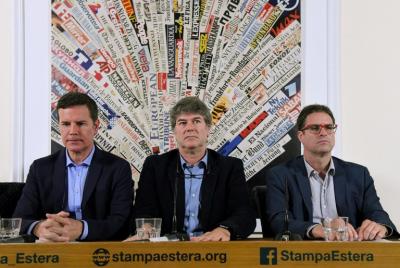 ROME – Chilean-born activists and victims of sexual abuse, Juan Carlos Cruz, James Hamilton and José Andres Murillo, held a conference at the Foreign Press Association on Wednesday about their conversations with Pope Francis on sexual abuse in the clergy.

It’s the first time that they’ve spoken to the media about their stay in the Santa Marta residence inside the Vatican, which happened over the weekend.

The trio have been denouncing crimes of sexual abuse committed by the notorious Father Fernando Karadima, 80, for over a decade now. At first they were branded liars and traitors, even by the Chilean press, who initially sided with the wrongdoers, including the Chilean bishops who helped Karadima cover up the abuses.

Yet they prevailed in their journey to the truth, which slowly started to emerge from the parish of El Bosque, Providencia, where Kardima reigned and was heralded a “living saint”. The Vatican decided to remove him from the ministry and in 2011, ordered him to a lifetime of penance and prayer.

The Chilean trio started the conference by reading a communication that effectively summarised their stay with the Pope.

They explained how receptive and empathetic Francis had been during their long hours of conversation and how he’d officially asked for their forgiveness after sharing in their pain and humiliation.

He acknowledged that he’d made a “grave mistake” during his visit to Chile in January, when he put in question the men’s claims, calling them “calumny”.

The Chileans also spoke to him “frankly” about sensitive topics, including sexual abuse, abuse of power and the cover-up scandal by the Chilean bishops. The pontiff listened to what they had to say, as well as their suggestions on how to stop this kind of behaviour in the Church.

Francis reportedly said that action would be taken, however the question remains as to how it will manifest itself. This will be revealed in the following weeks.

The Q&A session that took place gave the Juan, James and José the opportunity to reveal further details about their meeting, as well as more personal reflections.

When asked about what specific action they thought the Pope should take to save “a Church in crisis”, James Hamilton responded with three suggestions: firstly, to identify the root of the problem and ask why there was sexual abuse in the Church. Secondly, to make the clergy equal in the eyes of the law and allow them to be submitted to the same penal processes. Thirdly, to start a process of prevention and investigation in order to help victims and restore the Church’s reputation and image as a place that welcomes the oppressed.

A more direct reporter asked the Chileans whether they’d given the Pope an ultimatum as such: “If some heads don’t roll is anything going to change?”

Juan Carlos started off by clarifying that they weren’t there to give the pontiff an ultimatum. However, they didn’t shy away from talking about difficult topics in great detail.

He also added that he’d never experienced someone be so “contrite” and “truly sorry” for what had happened: “I believe that it was sincere”. He even said that the Pope was sorry for being “part of the problem” in some way.

José Andres was grateful for Francis’ apology and kind reception, however, clarified that the most important thing for him was for this pardon to manifest itself into action, to which Juan Carlos agreed.

Another interesting question that was posed to the panel was whether this meeting represented a triumph for them after 10 years battling their case.

Juan Carlos began by saying that it was a very important experience for him, one that he’s still trying to process, while Hamilton was grateful to Francis for recognising that he’d made a mistake: “We met with a human being and that was very positive”. The meeting also gave him the opportunity to tell Francis himself that the Church was facing its biggest ever crisis: an internal one that was killing the faith from the inside.

José Andres was less positive, highlighting how exhausting the past ten years had been for him: “It’s been a long and tiring journey”. He also spoke about the countless victims of sexual abuse he’d worked with and met, saying: “That’s the only reason that this has any meaning for me”.

All three responded powerfully to the question: Is there anything you have to say to Mr. Karadima, who is probably watching this live on TV?

Juan Carlos bluntly replied: “I don’t have anything to say to Karadima”.

James Hamilton said that he too had nothing to say to Karadima, but with regard to the bishops who’d hurt him twice over by covering up the scandal, he said: “You’re all criminals”.

José Andres addressed the “other types of Karadimas” out there in the world, saying that they wouldn’t stop persecuting them in the name of the Church and all the victims of sexual abuse.

The Chilean trio have begged Pope Francis to impose serious sanctions and to not disregard Karadima and his accomplices’ actions as "sins", but as "crimes", in order for the faith in the Church to be fully restored.

It was a very moving conference that marks a positive step forwards for José, James and Juan. While no course of action has yet been decided by the pontiff, there is no doubt that something will come out of these discussions.

One of the concluding questions was: Are you capable of forgiveness?

José Andres replied saying that for him, forgiveness was something private and intimate, and that “the most important thing now is action”.

James Hamilton acknowledged that he was capable of forgiveness, however not for the sake of the wrongdoers but in order to alleviate himself.

Juan Carlos said that it was his duty as a Catholic to forgive, but that if he didn’t see any concrete action it would make it more difficult. Nonetheless he felt honoured to be with his two dear friends and to have spoken to the Pope: “Now everyone knows everything.”