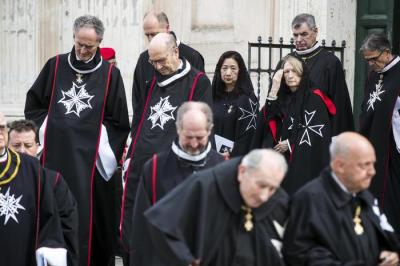 Dalla Torre was elected by the 56 members of the order, commonly known as the Knights of Malta, and will serve as their 80th Grand Master.

The 73-year-old will now be tasked with heavy reforms to the world’s oldest surviving chivalric order after a stormy ending to the leadership of former Grand Master, Matthew Festing.

Festing’s reign has left the Order swamped in deep-rooted internal issues, littered with controversy and opposing factions. He was dismissed by Pope Francis in January 2017 on the back of a heated dispute over the distribution of condoms in Myanmar.

As a conservative Catholic, Festing had reportedly opposed this supply in the war zones and the now elections follow his recent reinstatement into the Knights of Malta.

The pope has called for the transformation of the Order of Malta and recently appointed Monsignor Angelo Becciu as Special Delegate, whose role will focus around assuring that the Dalla Torre proceeds with the urgent reforms for modernisation.

Two women had run in the elections for the first time in the long history of the Order, predominantly made up by monks under a vow of chastity, poverty and obedience.

The pontiff’s recent intervention in the Knights of Malta appears to have somewhat reduced the Order’s autonomy, instead moving control in the direction of the Holy See. However, the Order remains subject to international law and retains sovereign functions, which has led to further controversy in recent years.

The vote had comprised a second option to electing a new Grand Master; voters could instead have chosen another Lieutenant to lead the Order for a further year and rework the constitutions, which have not been amended since 1997, within a framework established by the Holy See.