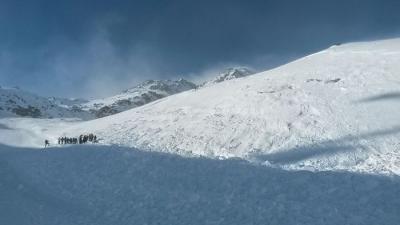 ROME – The mountaineering tragedy in the Swiss Alps claimed its seventh victim after an Italian woman died in hospital on Wednesday. The 42-year-old Italian climber becomes the sixth Italian casualty to have died from injuries sustained along the 180 km Haute Route crossing from Chamonix to Zermatt, officials said.

One of the victims was expert guide, Mario Castiglioni, 59, from Como, who was leading the group of 14 Italian, French and German nationals alongside his Bulgarian wife, Kalina Damyanova, 52. He died in the area of Pigna d’Arolla after getting stuck in a blizzard.

The storm, with gusts of wind of up to 100 km/h and icy temperatures, surprised Castiglioni’s group shortly before they arrived at the Des Vignettes shelter in the penultimate stage of their route. They were reportedly forced to spend the night outdoors.

The rescue operation began after an alarm was launched at 06:30 on Monday from the Des Vignettes shelter. Seven helicopters from Air Glaciers, Air Zermatt and Rega came to their rescue, as well as several doctors and guides.

However, when they reached the hut Castiglioni had already died from a serious fall, after he desperately tried to reach the shelter by himself to sound the alarm.

The other five victims died of frostbite and hypothermia in the hospital in Switzerland after having spent the night at 3,200 metres above sea level.

Mario’s wife Kalina was among the casualties, as well as school teacher Elisabetta Paolucci (44) and married couple Marcello Alberti (53) and Gabriella Bernardi (53), who were all experienced hikers from Bolzano. The other Italian victim has not yet been named.

One other climber remains in a critical condition, while the others who were hospitalised for slight hypothermia are not in danger.

On the first May Day bank holiday, and in less than 72 hours, this makes the total number of casualties a shocking 14.