Alfie Evans' father calls for supporters to 'stand down' 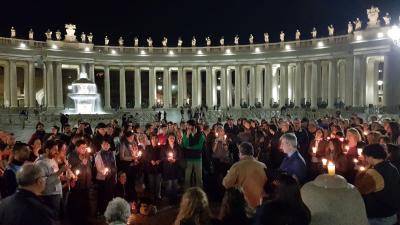 ROME – The father of terminally ill Alfie Evans has acknowledged that the battle is over for the transfer of his son to Italy where he has been offered medical treatment, in a statement by the parents. Tom Evans thanked everyone for the widespread support Alfie and the family had received throughout their “incredible fight.”

Around 300 people gathered in St. Peter’s Square for a candlelit service on Thursday evening and thousands more watched a live stream of the vigil on Facebook.

Many were expected to return to the Vatican again at 22:17 CET on Friday evening to pray for Alfie, coinciding with the time at which his life support was turned off by doctors, who considered efforts to cure the toddler’s undiagnosed degenerative neurological condition as “futile.”

However, Pope Francis had called for Alfie to come to the Vatican for treatment at the Bambin Gesu Hospital, having been granted Italian citizenship.

In a statement, Tom Evans and Alfie’s mother Kate James expressed their appreciation to Italian and Polish supporters, adding that they now hoped to “build a bridge” with doctors at the Alder Hey Hospital.

The organisers of the St. Peter’s evening service had announced on Thursday that “the initiative would continue for a long as is necessary. St. Peter’s Square was chosen as a sign of thanks to the Pope for what he is doing.”

Support for Alfie caught on at a national level with similar vigils having been planned in Modena and Turin as his story spreads across social media.

Tom Evans and Kate James are now awaiting the doctor’s authorisation to take Alfie home. They urged supporters to “return to your everyday lives,” adding that no further statements would be issued.