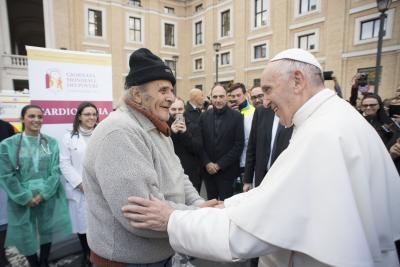 Pope Francis (right) with the poor

ROME - Every year the Vatican celebrates the Feast of Saint George on April 23. It also happens to be the patron saint of Pope Francis, who’s baptismal name Jorge is the Spanish equivalent.

The pontiff will offer ice cream to roughly 3,000 people in celebration of the day’s events. The gelatos will be served to the poor in soup kitchens and shelters around Rome by the Catholic charitable organization Caritas.

A prayer for peace will be held later on at the church of San Calisto, in Trastevere, followed by a communal dinner.

Migrants who frequent the People’s Peace Centre in Via di San Gallicano, and even the sick from the Saint Francis of Assisi home, will also be able to share in the day’s festivities and enjoy the Pope’s ice cream.

Francis often makes these kinds of gestures to the poor communities of Rome. In the past he has thrown a pizza party lunch on his birthday, taken the poor to the beach during the hot summer months, done a trip to the circus and led a tour round the Vatican museums.

For Monday’s celebration, he’s chosen to cool everyone down with a sweet treat. His favourite ice cream flavour is reportedly the Argentine classic dulce de leche.

On Sunday, 150 elderly migrants, many of whom were from the Philippines, had lunch in the canteen of Via Dandolo, where the pope was serving pudding.