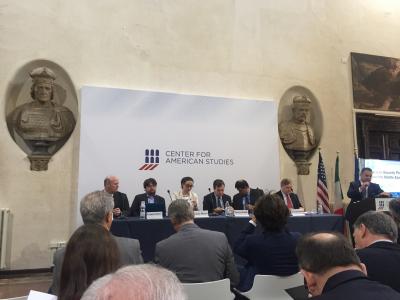 ROME - David Campbell Bannerman encouraged the audience of the Monday conference to “wake up to the reality” of the Iranian influence in the Middle East, accusing Iran of having a “record of destabilization” and a pattern of “sponsorship of terror.”

Bannerman, Chairman of the European Parliament’s Delegation for relations with Iraq and Member of the European Parliament for the British Conservative Party, initially focused on Iranian missile technology and the possible detrimental consequences that could follow the firing of Iranian missiles in Saudi Arabia. He said that after the situation in Syria calms down, there is a real possibility that a war could break out on Lebanon’s border and implored Iran to "stop destabilizing the Middle East."

He adamantly condemned Iran’s activity, saying under “every stone in the Middle East, Iran is crawling underneath.” He drew on the examples of Iran’s financing of Hamas in Gaza and their “backing of the Houthi rebels” in Yemen, even accusing them of having “caused the situation and terrible suffering.” He also used the example of the Iranian agents in Bahrain that were sent to help “topple” the government there.

An Iranian diplomat defended Iran’s involvement in the Middle East, asserting Iran’s dedication to fighting against ISIS and terrorism around the world. He implored Iran to "stop destabilizing the Middle East."

The conference in Rome was put on by Euro-Gulf Information Centre, the Center for American Studies and the NATO Defense College as part of “The Great Rivalry” series, and explored the ever-changing geopolitical situation in the Middle East, with a particular focus on issues of security, defence configuration and strategies for the resolution of the conflict.

David Des Roches, an Associate Professor at the Near East South Asia Center, highlighted the key themes consistently present in American Foreign Policy: Isolationism, Idealism and Realism. With claims that the United States’ national defence strategy had not changed significantly since 1950, he drew parallels between that of the Trump administration and the Obama administration, saying that the main difference is that of wording and phrasing.

When offering his opinion on how to solve the crisis, De Roches insisted “there is no political solution for Syria” and said that a “military solution” was necessary, but not led by the West.

This was followed by Gumer Isaev’s talk which focused largely on clarifying Russia’s relationship with Iran, a relationship which has received both scrutiny and criticism.

Isaev, the Director of the Center for the Contemporary Middle East Studies based in Saint Petersburg noted that Russia had good relations with Iran prior to the Arab spring in 2011, but had not wanted to risk spoiling relations with the United States, however, these relations were later damaged following the annexation of Crimea.

Whilst analysing their relationship, Isaev emphasised Russia and Iran’s differences and ultimately different goals, underlining that “Russian officials do not call Iran an ally”, alluding to the “temporary” nature of the connection.

Vincenzo Amendola, a long-serving member of the Italian parliament, emphasised the need for cooperation and communication between the nations, in order to combat the crisis. In his analysis, he expressed that although a military intervention alone would not put an end to the conflict, he could see a way out if Europe, the Gulf and the United States were all to combine. With regards to Syria, he said that its future will be determined by how we “de-proxy” the political situation and that the United States “needs to stay engaged to find a way out”

The final speaker Ashraf Kishk, focused on NATO’s relation to the Gulf, concentrating on NATO’s reaction to regional security threats and the opportunity to develop the NATO-Gulf partnership. He expressed that in the Gulf, the main problem is that of the imbalance of power and that NATO can aid the security sector.

Whilst he recognised the gap between the Gulf Cooperation Council’s (GCC) security needs and what NATO can provide, he still encouraged the growth and development of the partnership and expressed that GCC could also prove to be an important regional partner for NATO to rely on.