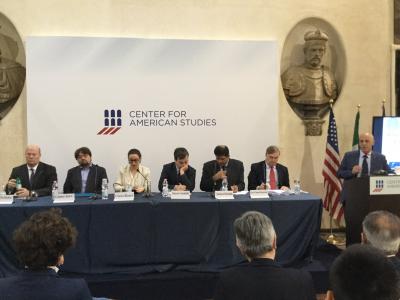 ROME – The president of the EGIC Dr. Mitchell Belfer climaxed a conference on the Middle East by insisting there are grounds for optimism that peace can break out in the strife-torn region. He called on the curbing of small arms sales and sharing of intelligence to stamp out terrorism.

Dr. Belfer concluded the discussion at The Great Rivalry III Conference, hoping to shed a positive light upon an analysis largely drowned out by a pessimistic realism.

He looked towards an end to the financing of terrorism through the “proliferation of weapons of conventional destruction,” citing this as a root cause of the conflict which could be solved through collective responsibility.

Whilst clashes in the Middle East and the Gulf will continue to spill over to Europe, “there is hope for optimism in the region,” Dr. Belfer said, praising the inclusive, diverse model of Bahrain.

He emphasised that we must strive to envisage the coming peace in the region, rather than contemplate the coming war.

A diverse panel drew together speakers from NATO, the USA, Russia, the UK, the EU and the Gulf region, in an enlightening, multifaceted analysis of how security and defence in the Middle East has transformed alongside the region’s shifting geopolitical balance.

Having delivered their personal and national perspective, the speakers were cross-examined by an active audience at the event organised by the NATO Defence College, the Euro-Gulf Information Centre and the Centre for American Studies.

MEP David Campbell Bannerman, who is also Chair of the Iraq Delegation, urged a more cautious approach to the delicate affairs of the Middle East and the Gulf. Western leaders, he said, must learn from past strategic mistakes and “be very careful who we back in the future.”

“It is better to have a bad secular leader than a bad ideological one,” he added, pointing to the mess in Libya, created by the West in the wake of Colonel Gaddafi’s rule.

Under pressure regarding military intervention in the region, Prof. David Des Roches, Senior Military Fellow at the National Defence University, USA, highlighted that a military solution would need to be found for Syria, as “there is no political solution.”

All the speakers were collectively questioned as to why there had been no mention of Turkish President, Recep Tayyip Erdogan.

Prof. Des Roches responded, stressing the fundamental transformation Turkey has experienced in recent years, which is still taking shape. “Turkey has changed in ways we don’t understand,” he said.

Dr. Gumer Isaev, Head of the Centre for the Contemporary Middle East Studies, Saint Petersburg, answered in similar fashion, noting the unpredictability of the Turkish government, whose intervention in Syria demonstrated a “misunderstanding” of the situation.

The Italian Undersecretary of State of Foreign Affairs and International Cooperation, Hon. Vincenzo Amendola, later responded to questions surrounding the success of the Joint Comprehensive Plan of Action (JCPOA).

Far from convinced that the destruction of the JCPOA would solve peace in the Middle East, Mr. Amendola underlined that “the community should be more tough with Iran,” calling on a greater sense of “responsibility” from its members, reiterated by Dr. Belfer.

“Preserving the JCPOA means preserving a unilateral agreement on non-proliferation,” Mr. Amendola added, whilst expressing his amazement that the “surprise” of chemical attacks in Syria has taken so long reach the Western world.

The Gulf Cooperation Council (GCC), which largely acts as a counterbalance to Iranian influence throughout the Gulf, greatly relies on NATO as a security option to keep its powerful neighbour at bay.

This was expanded upon by Dr. Ashraf Kishk, Head of the Strategic Studies Programme Bahrain Centre for Strategic, International & Energy Studies.

He alluded to the “threat to stability” posed by Iran and noted that “NATO can help achieve the balance of power in the region,” resolving conflicting interests of supranational power and regional power.