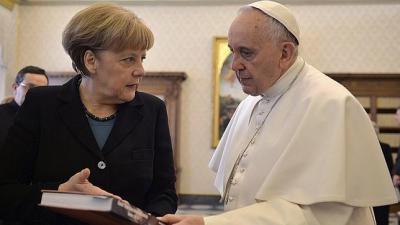 ROME – The German Chancellor, Angela Merkel, will visit the Basilica of St. Francis of Assisi on May 12 to receive a gift by the monks of the Sacred Convent: the blessed Lamp of Peace belonging to Saint Francis.

They’ve granted her this award because of her “reconciliation efforts in favour of the peaceful coexistence of peoples”, both in Germany and Europe.

At the meeting, during which the Chancellor will say a reading, Colombian President and Nobel Peace Prize winner, Juan Manuel Santos, will also be present. The monks awarded him the same prize last year.

The Custodian of the Sacred Covent of Assisi, Father Mauro Gambetti, has stressed that the lamp of Saint Francis of Assisi is “a gift that we hope will nourish the programmatic spirit of these leaders, encouraging them to continuously search for the common good, development and relationships amongst people whose principles are based on the care of the community, sharing and integration.”

“The Europe which we see”, continues Father Mauro, “still has a long way to go for it to reach a possible ‘common unity'. Europe must deal with the lights and shadows of its history and internal and external discrepancies, learning how to welcome others and overcome differences."

At the press conference that took place on 12 April at 11:30 in the Foreign Press Association, the following people were present: Father Mauro Gambetti, Custodian of the Sacred Covent of Assisi; Juan Rafael Mesa Zuleta, Colombian Ambassador in Italy; Julian Rössler, Director of Cultural Affairs and the Press Office of the German Embassy; Betty Escorcia, Minister Plenipotentiary of the Colombian embassy; and Father Enzo Fortunato, Director of the Press Room at the Sacred Convent of Assisi.

“In such a dramatic context of war and injustice”, said Father Fortunato, “we need gestures and ‘lights’ of peace. It is necessary and urgent to grow in the awareness that war is man’s defeat."