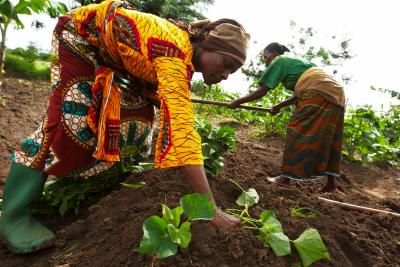 PERUGIA - The International Fund for Agricultural Development (IFAD) is organising an event as part of the Perugia Journalism Festival to amplify the voices of women living in remote and rural areas of developing countries.

The discussion, which will be aimed at a panel of leading journalists and experts, will revolve around the question: ‘Why feminism’s next wave has everything to do with farming?’. The panel will be made up of the following people: Raffaella Menichini from La Repubblica, Megan Williams from Canada's CBC, Thin Lei Win from Thomson Reuters, Caroline Namara from Radio Bushyeni in Uganda and IFAD's Ilaria Firmian .

IFAD is based in Rome and is one of the United Nation’s leading food and agricultural agencies. It has dedicated itself to investing in rural communities for over 40 years, empowering them to reduce poverty, increase food security, improve nutrition and strengthen resilience.

As feminism around the world and the #metoo movement become evermore prominent, IFAD wants to make sure that women from rural communities in developing countries don’t get left behind and also have their voices heard.

They want to shed light on the fact that that women from these nations control far less land than men, in fact less than 20 per cent of landholders are female, and also have limited access to resources. Moreover, they are vulnerable to violence and domestic abuse by their male counterparts.

This type of inequality has a huge impact and translates itself into a large gender gap in agricultural productivity, for which countries pay a high price. Uganda, for instance, pays an estimated US $67 million per year as a result of their country’s gender gap in the agriculture sector.

In Mozambique and Tanzania, however, IFAD support a project that provides farmer groups, of which more than 50 per cent are run by women, with financial education and technological tools training. This helps and encourages them to move from a cash dependant business to electronic payments. In doing so, these farmers gain entry into the financial sector and become more aware of market prices, subsequently helping them increase profits and build their savings.