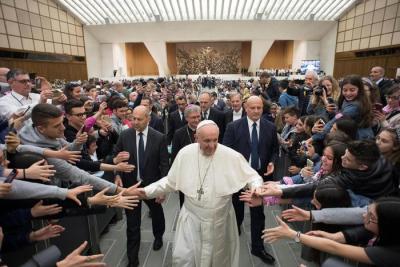 VATICAN CITY – In his Apostolic Exhortation, Pope Francis warned Monday of the internet’s troubling capability to inhibit holiness, whilst focussing on the urgent need to support migrants, raising a more global response to combat their struggles.

“Sowing peace all around us; that is holiness.”

The pontiff, once again, took a forward-thinking, modern stance “Gaudete et Exsultate” (Rejoice and Be Glad) on holiness, which holds significant weight as a teaching document for the Roman Catholic Church. In his message, Francis said that he hopes to “re-propose the call to holiness in a practical way for our own time,” conveying an emphasis on active faith.

His recurrent, progressive perspective on the Catholic Church and its interaction with contemporary social issues has been a sticky point for many traditionalist opponents, distancing the faithful, so they say, from true Catholic teachings.

Whilst underlining the value held through “the silence of prolonged prayer,” the pope was openly cautious of mind-sets which rely solely on human will, “as if it were something pure, perfect, all-powerful, to which grace is then added.”

The plight of migrants, Francis added, has too often been pushed back as a periphery matter. “Some Catholics consider it a secondary issue compared to the “grave” bioethical questions,” he said.

In the wake of last month’s Italian elections, which saw a surge in support for Matteo Salvini’s anti-migration League party, the pontiff sought to revitalise compassion towards migrants and speak out globally on their struggles.

“That a politician looking for votes might say such a thing is understandable, but not a Christian, for whom the only proper attitude is to stand in the shoes of those brothers and sisters of ours who risk their lives to offer a future to their children,” the pope noted, in a topic which became central to his call to holiness.

The internet has allowed potentially threatening “verbal violence” to thrive and the pontiff added his concern that its exposure and manifestation has no parameters.

This virtual reality, Francis warned, is particularly dangerous to children, who are becoming increasingly immersed within this technological space.

“Even in Catholic media, limits can be overstepped, defamation and slander can become commonplace, and all ethical standards and respect for the good name of others can be abandoned,” the pope added.

“Here we see how the unguarded tongue, set on fire by hell, sets all things ablaze,” the pontiff stressed, expressing his caution on modern, time-consuming technology and communication.