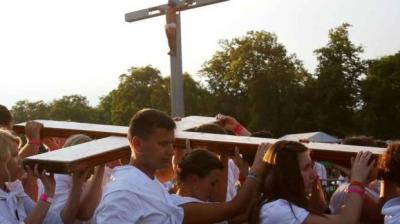 VATICAN CITY – This year’s Via Crucis, held annually at the Colosseum on Good Friday, will incorporate significant roles for students as Pope Francis hands over responsibilities to the younger generation.

The pontiff’s decision to embrace student participation passes over the writing of thoughts and meditations, for the first time, to people ranging from 16 to 27 years old. The students, predominantly composed of women, are set to read out their texts at different Stations whilst the event depicts the poignant, final moments of the Passion of Christ.

The celebrations take place each year amidst the picturesque backdrop between the Colosseum and the Temple of Venus. In what is expected to be hugely emotive display, the students hope to portray the tragic ending of a man “only a few years older” than them.

Andrea Monda, a religious studies teacher in Rome, will coordinate the event. He explained how he brought the group together to read the Gospel accounts from the Passion of Christ. The 14 different Stations were then assigned depending on how each student related to the various episodes.

The young group has taken a partially modern-day approach, highlighting how hatred today is still sadly evident on social media, having moved beyond the squares where Jesus was abused many years ago.

Greta Sandri, who will be positioned on the eleventh Station, added, “I see eyes fixed on phone screens, engaged on social networks, nailing other people’s every mistake without a chance of being pardoned.”

Thousands of pilgrims are expected to watch the Via Crucis, which will also be broadcast on television.