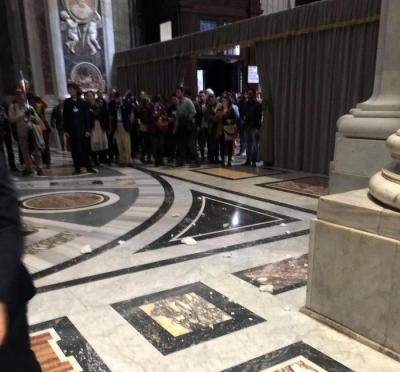 VATICAN CITY – Several pieces of plaster fell from Saint Peter’s Basilica, fortunately causing no harm, in a narrow escape for many tourists. The plaster crashed down from a pillar on the Basilica’s left nave and the area was quickly sealed off as workers arrived at the scene.

Masses of tourists crammed into a packed Saint Peter’s Basilica were left shaken as a shower of plaster rained down from a height of 20 metres, not far from the chapel where Michelangelo’s Pieta is located. Unscathed from the incident, many reached for the phones straightaway, eager to log the near miss with photos, videos and selfies, seemingly unconcerned by any further hazard.

A Russian tour guide recounted the extraordinary event, stating that the most absurd moment was actually that “many tourists who were nearby, began to pick up the pieces of plaster to take them away,” intent on keeping them as a souvenir. He added that it was fortunate no further pieces dropped immediately after, reflecting on the lucky getaway for many, especially considering the higher than usual volumes of visitors over the Easter period.

Hoping to minimise disruption to tourists, as crowds grow towards the climax of Easter Sunday, the damage was swiftly repaired and any remaining danger was patched up.

Greg Burke, Director of the Holy See Press Office, cleared up the situation adding that “no one was hurt and the area was immediately closed to the public. Workers intervened promptly and are working to secure the cladding of the pillar. The Basilica remained open and will also reopen regularly tomorrow.”