Pope to wash feet of inmates at Regina Coeli prison 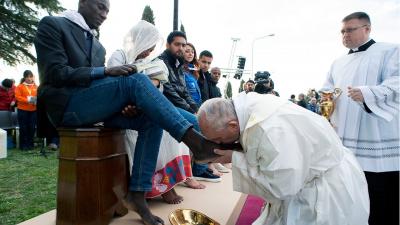 VATICAN CITY – Pope Francis was due to celebrate Maundy Thursday by visiting the Regina Coeli prison in Rome in the afternoon, symbolically washing the feet of inmates.

During his time as archbishop in Buenos Aires, the future pontiff began to spend Maundy Thursday in the places of greatest suffering in the city, a tradition he has brought with him to the role of pontiff.

The Vatican has selected 12 prisoners incerated at Regina Coeli of different nationalities and religions. A Buddhists and two Muslims will be amongst those that have their feet washed by the pope, a mirroring of Christ’s washing of the feet of the disciples at the Last Supper.

“It’s a gesture of intensity that words cannot describe,” the prison chaplain, Fr Vittorio Trani, argued. “The Pope really goes to them to bow like Christ.”

The pope will then preside over mass at the prison before visiting those in the infirmiary and those who need protection while incarcerated.

Around 600 people are set to attend, including prisoners and staff. Regina Coeli has a noticeably young population with almost 65 percent of inmates aged between 18 and 35. It also houses prisoners from 60 different nationalities.

On Friday, the pope will return to St Peter’s, before an event at the colosseum that francis has entrusted to young students this year. The pontiff announced that during celebrations on Saturday evening, he will baptise eight adults “who begin the Christian life.”